Set to release on November 19th, CD Projekt Red’s Cyberpunk 2077 is one of the most highly anticipated games of the year. Adapted from a classic tabletop RPG released in 1988, Cyberpunk 2077 is set in the dystopian Night City – and we just got our first good look at the map.

Cyberpunk 2077 will see a wide release on current-gen and next-gen consoles, both digital and physical. For those lovers of physical media, CD Projekt Red is releasing a boxed edition including the map, post cards, stickers, a reversible cover, and a Night City compendium. Images of this bounty of extra content have leaked online, with a good look at the full map. 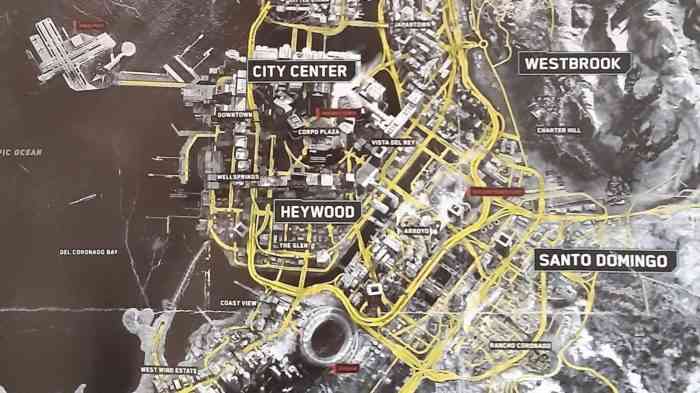 The leaked images show how the 6 districts of Watson, Heywood, City Centre, Westbrook, Pacifica, and Santo Domingo will fit together; with the more industrial zones to the north, and the more rural and suburban zones to the south. Fans of CD Projekt Red’s previous title, The Witcher 3, will remember the enormous scale of that game and may be surprised by the map for Cyberpunk 2077 appearing a little smaller than they may have expected. However, Cyberpunk’s gameplay is paced differently and far more vertical than the Witcher 3, so perhaps this accounts for the smaller size.

The map reveals the variety that we can look forward to exploring when Cyberpunk 2077 releases. As well as the dense urban sprawl of Night City, the map feature oil fields to the north, and a substantial body of water in the west in which players will be able to swim and dive to explore. It is encouraging to see such diverse environments included in the map as potential staging areas for the excellent side-quests that are CD Projekt Red’s trademark.

When developing side-quests for the Witcher 3, the Polish developers were determined to avoid that feeling of ticking off a check-list that plagues many open world games. Instead they attempted to string together stories that compelled players to explore every corner of the map, an approach that they seem to have doubled down on with Cyberpunk 2077. Now we have a better idea of what Night City will look like, and it is a safe bet that CD Projekt Red will have filled the environments with exciting discoveries that await players when the game releases in a little over a month – in fact you may even end up ignoring the main quest altogether!

Did you spot anything we missed on the map? Let us know in the comments below!