The Conclusion to Their Fate

Do you remember the glory days of Guilty Gear? I don’t, sadly–I always get into fighting games late, except BlazBlue, which I somehow got into early–but that doesn’t change the fact that Guilty Gear Accent Core+ is one of my favorite games, period. Slick action, complex combos, character designs that I still hold up as some of the best the whole genre has to offer, and an enthralling base premise still make it stick out among the rest. An immortal scientist turned monstrous swordsman, slashing his way through a pseudo-medieval dystopia in search of the man who stole his humanity? You could make a movie out of that. You could make several movies out of that, and it’s only one of many story modes. And the music! Don’t even get me started on the music. Some things have changed since the franchise was revived with Xrd, which sadly rendered Accent Core+ non-canon, but others have stayed the same. The important things. Which is to say, Guilty Gear Strive has a release date, and it comes with great visuals and an awesome soundtrack.

That’s right: after being announced for 2020 and then delayed to 2021, Guilty Gear Strive finally has a firm release date of April 2021. These new gameplay clips confirm that Chipp Zanuff and Potemkin will be returning characters alongside Sol Badguy, Ky Kiske, Axl Low, May, Millia Rage, and Zato-1, to name a few. We’ve also got a new character confirmed: Giovanna. No, not the JoJo character–this Giovanna is a redheaded woman working as a special operations unit officer, accompanied by her spirit wolf companion, Rei. She can allow Rei to possess her in exchange for inhuman speed. Not a bad trade, but she may have to work a little harder than that to stand out in a cast as colorful as Guilty Gear‘s.

We’re also getting a glimpse of the new game’s storytelling, which features a fully animated story with the stylized 3D models the new Guilty Gear games use so well. The specifics have yet to be revealed, but a leading quote from this trailer is giving us some ideas of where the story could go: “Someone once said… that if mankind’s endless desire could be sated, inequality and conflict would come to an end. But you could also put it this way. If you took away all desire from mankind, that would make peace. Who wants a world like that?” 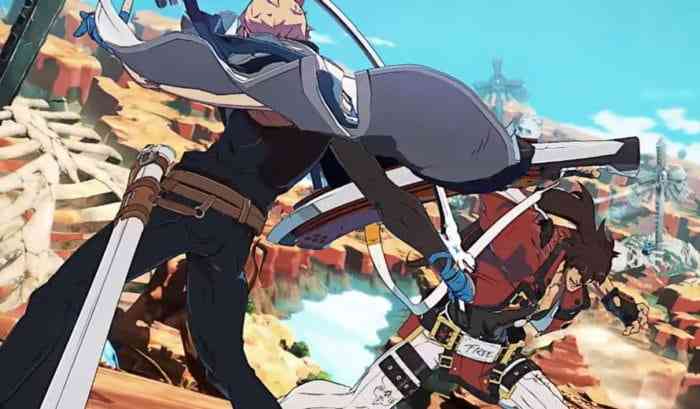 Who, indeed? Here’s hoping we find out soon. Guilty Gear Strive will be available for PS4, PS5, and PC on April 9th, 2021. Preorders open today.

Are you looking forward to the new Guilty Gear?  Let us know down in the comments, or hit us up on Twitter or Facebook.