The next Guilty Gear game has been hit with delays due to the COVID-19 pandemic, but Arc System Works has finally landed on a new release date. Originally planned for a late 2020 release, the makers of Guilty Gear Strive opted for a 2021 release window. Arc System Works released a new trailer that didn’t just announce the release date, but it also laid out the differences between the editions that fans can purchase. Of course, it wouldn’t be a Guilty Gear trailer without the sick soundtrack. 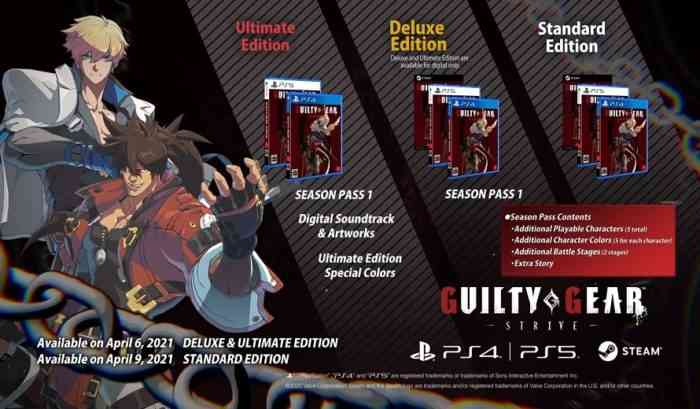 Despite this video being called an “English” version, you’ll have to do the readings to get the information. After all the anime action, we get a look at the Standard, Deluxe, and Ultimate Editions of Guilty Gear Strive. The Standard Edition, of course, just contains the game. The Deluxe Edition comes with the first Season Pass comes with 5 bonus characters, 5 additional character colors (5 per character), 2 additional battle stages, and an extra story mode. The Ultimate Edition comes with the Season Pass, plus the digital soundtrack and artwork, as well as special colors exclusive to the Ultimate Edition. Pre-ordering the game also gets you special colors for Sol and Ky.

It sounds like the most cost efficient edition is Deluxe, but if anyone wants to get the Ultimate Edition and hook up your ol’ pal Zane with the digital soundtrack, feel free to. Guilty Gear Strive will be coming out on April 9th for PC, PS4, and PS5, but if you get the Deluxe or Ultimate Edition, you will get it on April 6th.

Are you looking forward to Guilty Gear Strive? Let us know in the comments below.

Total War: Warhammer 2 DLC Comes Out Next Month
Next
Two New Doctor Who Games are On the Way
Previous
Godfall, DMC and Balan Wonderland Get New Gameplay Footage