For a little while, we have been teased as to what we can expect from the next batch of Borderlands 3 DLC with some specifics, but until now we did not really know what shape it would take as a whole. Today, Gearbox officially announced Borderlands 3 Season Pass 2, which will include two things called Designer’s Cut and Director’s Cut. The Designer’s Cut will contain new skill trees for each of the Vault Hunters as well as the upcoming game mode Arms Race. They are going to be sitting on information on the Director’s Cut for a while. 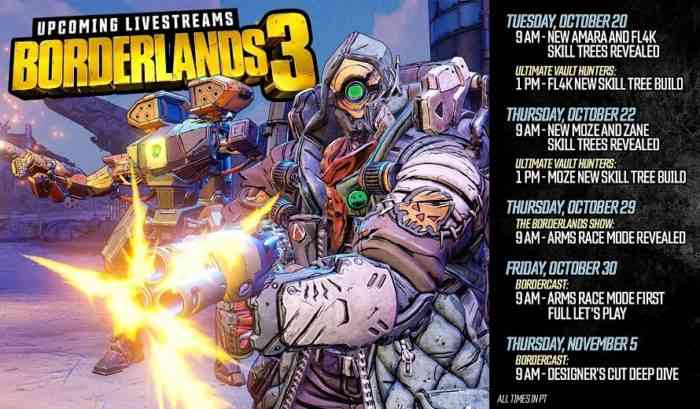 We have been given a taste of FL4K’s new skill tree “Trapper”, but Amara, Moze, and Zane will also get new trees as well. Between October 20th and November 5th, Gearbox will be holding streams showing off the new additions. On October 20th, the new skill trees for Amara and FL4K will be shown off with a gameplay demo of a Trapper build of FL4K. On October 22nd, a similar stream will be showing off Moze and Zane’s new skill trees with a new build for Moze. On October 29th and 30th respectively, we will see Arms Race officially revealed and then see a Let’s Play of the game mode. On November 5th, Gearbox will be showing a “deep dive” of the Designer’s Cut.

What are you hoping for from the Director’s Cut? Let us know in the comments below.

New Borderlands Update Broke the Handsome Collection for Some Fans
Next
Splatoon 2 Halloween Splatfest Coming Soon
Previous
COG Considers: Why Are There So Many Games About Killers With Split Personalities?