20 Years in the Books

Double Fine is known not just for its games, but also its unique style in designing them. Their games are not always the huge titles that grab headlines everyday, but they have a lot of stand-out games that gain huge cult followings. Since last year’s acquisition by Microsoft, CEO and founder of Double Fine, Tim Schafer has decided to chronicle the journey of his company in a book called 20 Double Fine Years. Some of their titles that stand apart from the others include Psychonauts and Brütal Legend, which will both be featured in the book, but at 280 pages, it is likely that all the games Double Fine was a part of will be seen. 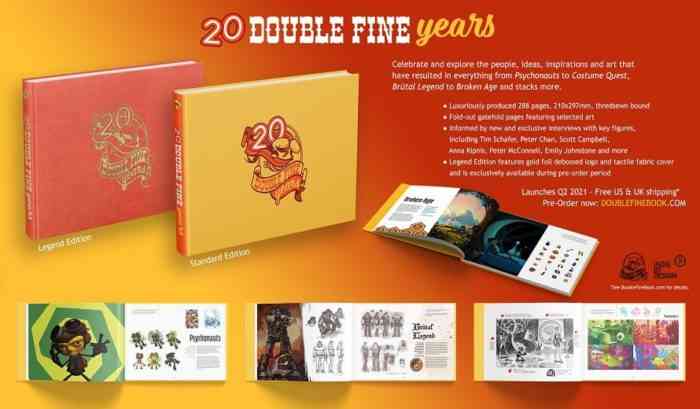 Tim Schafer’s words, likely to be a preface: “Recently, I was looking back on the amazing 20 years we’ve had as a game company, and… I totally drew a blank. Seriously, my memory just isn’t what it used to be. So I summoned my court scribes and said, ‘Pen me a tome, worthy of the ages, so that I shall remember every amazing detail of this crazy ride we’ve been on, and so that nobody, not even I, forgets this amazing story.’ And so they did. Every up, every down, every crazy sideways shimmy we’ve ever done is in this illustrated manuscript for all to remember. Heroic ballad? Cautionary tale? You be the judge!”

There is a Standard Edition and a Legend Edition of this book. The Standard Edition has a regular hardcover with the Double Fine logo on it, which can be purchased for $50. The Legend Edition has a luxury fabric cover with the Double Fine logo embossed in gold foil, which can be purchased for $65. Content-wise there does not appear to be any difference between the two editions. Both editions of 20 Double Fine Years can be pre-ordered now and are expected to ship in early 2021.

Would you get this chronicling of Double Fine? Let us know in the comments below.