SEGA has officially announced Puyo Puyo Tetris 2 and it will be a cross-generational title. Familiar characters such as Ringo, Tee and more will embark on yet another colorful journey six years in the making. The sequel to the popular collaboration will include a new map special new mission conditions and Skill Battles. Puyo Puyo Tetris 2 will be releasing for PS4, PS5, Xbox One, Xbox Series X/S, Nintendo Switch, and PC on December 8th. 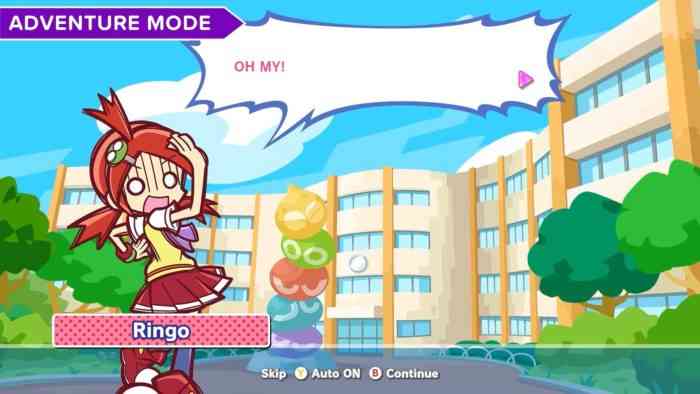 Skill Battles will apparently bring “a whole new layer of gameplay in Adventure mode,” according to SEGA. The new map looks like an improvement on the initial Puyo Puyo Tetris, and overall the visuals are improved. Tetris continues to be a hot brand with Tetris Effect, Tetris 99, and the upcoming Tetris Effect: Connected continuing to innovate on the classic puzzle game. Fans of the initial Puyo Puyo Tetris will basically know what to expect in terms of gameplay in the upcoming Puyo Puyo Tetris but the addition of Skill Battles sounds like an improvement to replayability.

Puyo Puyo Tetris 2 features a new story that brings together the game’s vibrant cast across various gameplay modes for up to four players to explore. Adventure Mode brings a load of content to story fans, while Skill Battles has a unique progression system. Fans of Puyo Puyo Tetris 2 on current-gen consoles will receive Xbox Smart Delivery and PS4 Upgrade support when they upgrade to the next-gen console of their choice.

Puyo Puyo Tetris 2 gamers will unlock Item Cards that give special abilities and options in Skill Battle which will be important to progressing through Skill Battles. New playable characters, backgrounds, bonus stages, and more can be unlocked by playing the game and in-game credits can be spent on Item Cards and more. The game’s campaign will apparently be improved from the formula initial set with the original Puyo Puyo Tetris when it released in 2014.

Will you be playing Puyo Puyo Tetris 2 this December? Let us know in the comments below!