Puyo Puyo Tetris combines two franchises that reside in the same puzzle genre, but isn’t a collaboration you would think could happen. Tetris is a game most people have played or heard of sometime during their life here in the West while Puyo Puyo, on the other hand, not so much. Tetris can be found almost anywhere, but the last localized Puyo Puyo game was back in 2004 on the Gamecube. Regardless, they both share the concept of piecing things together based on a specific colour, shape, type, and ultimate goal which is really all that’s needed to enjoy them.

Although Puyo Puyo and Tetris are under the same umbrella of the puzzle genre, their respective methods of ‘puzzling’ are a tad bit different. Tetris requires players to form a complete and full line from one end of the board to the other for the pieces to disappear known as a Tetris Line. Meanwhile, Puyo Puyo requires players to match four or more of the same colour Puyos side by side for them to disappear known as a Puyo Puyo Chain. In both cases, you don’t want the board to overfill causing a game over, but you do want to complete as many Lines or Chains to obtain more points. Both simple and immensely addicting on their own, but putting them together on a single game puts it on a whole new level.

“The various modes in the arcade truly flesh out the game allowing players to enjoy Tetris, Puyo Puyo, or both at the same time in an enjoyable and well thought-out manner.”

The first thing I did when I jumped into the game was heading straight to Lessons mode. No matter how accustomed you feel with Tetris or Puyo Puyo, I definitely recommend at least getting a refresher from the Lessons mode as they have tutorials and tips for each mode available as well as a general guide for gameplay mechanics. It’s well done and you’ll more than likely learn something new to immediately apply as soon as you jump into a match.

Puyo Puyo Tetris offers six different modes in its arcade that are each fun in their own respect and serve extremely well in offering varying ways to play. You have Versus which is a classic match of just Tetris or Puyo Puyo, Fusion where both Tetris and Puyo Puyo rain down on the board, Swap where Tetris is played on one board and Puyo Puyo on another that switch in and out, Party where items are present and you aim for the highest score, Big Bang where there is a pre-set pattern that you need to clear as fast as possible, and Challenge where you have a highscore to beat or endless mode to conquer. In addition, you can choose to tackle some modes alone, with a CPU, locally or online with up to three other players. You can even go competitive and play ranked matches if your heart desires. 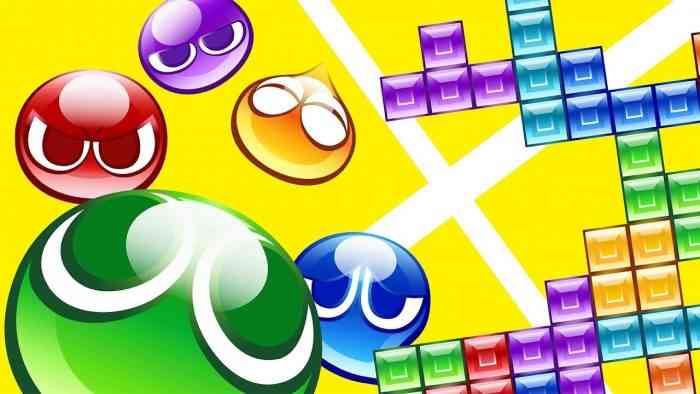 The various modes in the arcade truly flesh out the game allowing players to enjoy Tetris, Puyo Puyo, or both at the same time in an enjoyable and well thought-out manner. Some modes are more challenging than others like Fusion and Big Bang, but it’s all the more reason why you’ll keep returning to beat your highscore. You’ll always be in the mood for one of the modes, if not all.

Surprisingly, another mode in Puyo Puyo Tetris is Adventure mode where you actually go through a story with the characters from the Puyo Puyo series and brand new characters for the Tetris side exclusively in this game. The story is a light-hearted, exuberant, and humorous journey as the Puyo Puyo characters unexpectedly meet the Tetris characters to learn one another’s methods of ‘puzzling’ and usage of Puyos as well as Tetriminos. The gameplay itself is a mix of the various modes split up into numerous stages as you’ll first watch a short comic-like clip depicting the story then play through a challenge. This includes versing one of the characters or a solo challenge. Each stage can be replayed to obtain a higher score, but to advance you’ll need to complete the current stage (or lose a couple of times in a row to skip it).  It’s truly attuned for different skill levels and types of players which is always great to see. A little added bonus is being able to purchase new skins for Puyos and Tetriminos, unlock alternate voices, as well as unlock new characters as you progress through Adventure mode. It adds that little flare of customizability which is nice. 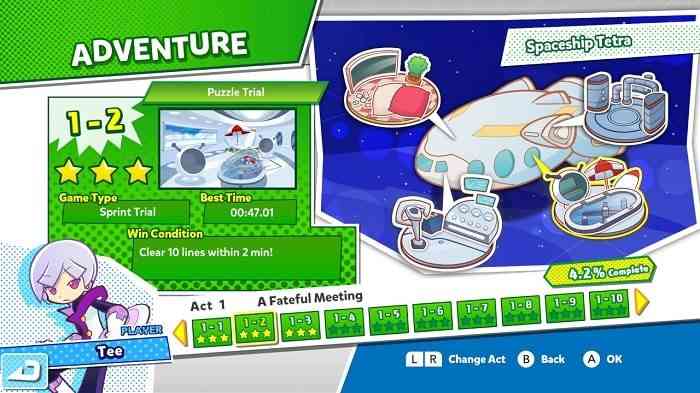 Visually, Puyo Puyo Tetris is colourful and super fresh looking. It just has so much life to it that you almost can’t help but get hyped as soon as you get to the title screen. Sound wise, all the characters have their own unique voices during dialogues in Adventure mode as well as within matches when they form Tetris Lines and Puyo Puyo Chains. It’s some quality work that can easily be appreciated. The only concern with the game I had was the AI difficulty as I felt it would spike randomly and even be inconsistent at times. During matches as well as throughout Adventure mode stages which was alarming at times, but a relatively minor issue.

Puyo Puyo Tetris isn’t just an arcade puzzle game; it’s packed with loads of different mode types, ways to play with others, and approaches to the puzzle genre. There’s so much to do in many more different ways that truly brings out both Puyo Puyo and Tetris in a unique way. Together, Puyo Puyo and Tetris make the ultimate stack, match, and clear game. If you even have the slightest urge to puzzle it out Puyo Puyo or Tetris style, give Puyo Puyo Tetris a shot, you won’t be disappointed. 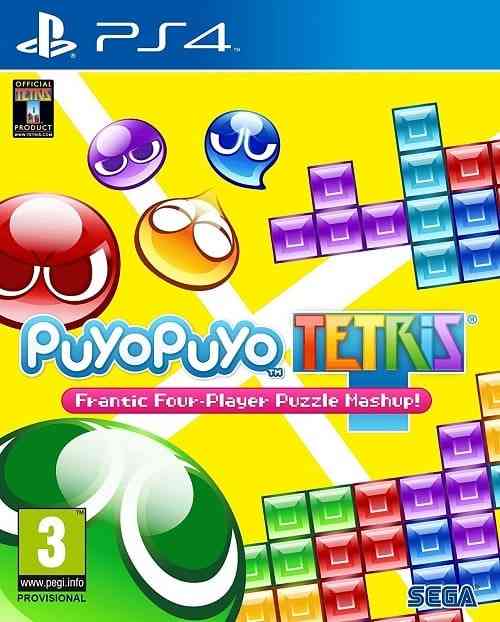 Crowns and Pawns: Kingdom Of Deceit Celebrates Success With Trailer
Next One Dog Story Review – New Dog With the Same Old Tricks
Previous What Remains of Edith Finch Review – Let’s Take a Walk