Ok. I’m pretty sure Crystal Dynamics is targeting me personally; your ol’ pal Zane. With this whole Spider-Man/PS4 exclusivity and now they put out this quick dev vlog called “Who Is AIM?” Excuse me! I wrote an article titled “Who Is AIM?” a year ago when they were announced! They just want to step on the little guy, I guess. Anyway, despite totally calling MODOK from that moment, there are a couple of things that you can learn about AIM from the new video released by Crystal Dynamics, including their role in the world of Marvel’s Avengers as an organization, not just the villains. 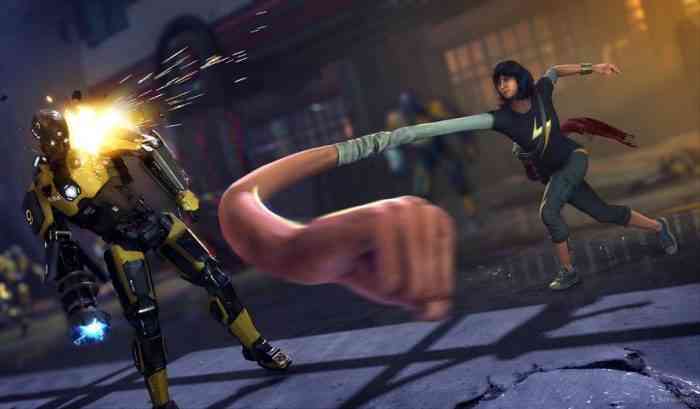 In this video, we have different directors and designers talking about AIM; what they are all about, who they are, and what they do. They also have the voice actors of George Tarleton AKA MODOK and Monica Rappacini, Usman Ally and Jolene Andersen, respectively, who explain who their characters are and what they are all about. In short, AIM are the good guys to everyday people in the world, but their dark underbelly that fights enhanced people like the Inhumans and Avengers is where they show their really villainous side.

Crystal Dynamics also explain the interesting design behind AIM in Marvel’s Avengers. The early comic books show AIM scientists and soldiers in sort of “beekeeper” outfits, which makes them anonymous; working together to create a better future, almost like a hive-mind. This bee motif is solidified in AIM’s hexagon, honeycomb-like symbol, which is plastered all over the place and even plays a part in almost all their architecture. In Marvel’s Avengers, AIM absorbed Stark Industries after A-Day, which is why they have all this access to advanced and powerful tech. You will be able to take on AIM when Marvel’s Avengers comes out on September 4th for PC, Stadia, Xbox One, and PS4.

Who will you take on AIM as? Let us know in the comments below.