The developers behind Fall Guys, Mediatonic have confirmed that Team Fortress 2 cosmetics are coming to the indie battle royale game. The announcement was accompanied by one of the cosmetic goodies that gamers can earn during the TF2 crossover, a Sout outfit complete with his baseball cap and signature outfit. The developers took to Twitter to make the recent announcement, but they didn’t suggest what other characters TF2 fans can expect from the upcoming crossover. Fall Guys is available for PS4 and PC right now. 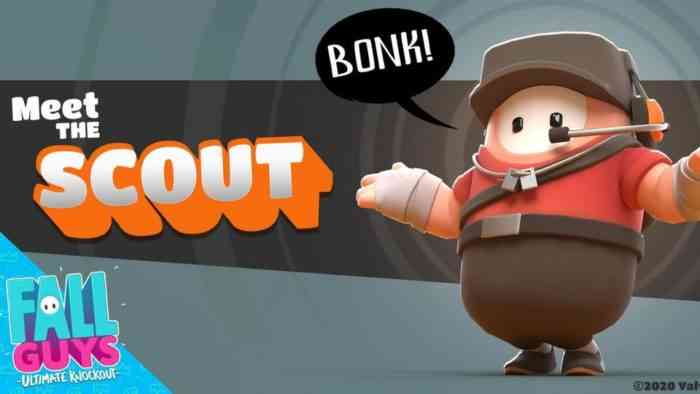 “BONK! Guess who’s coming to the in-game Steam store in a few hours?!?” said the official Twitter account for Fall Guys. “Better start getting in the dubs so you can save up enough ? Thanks @valvesoftware @TeamFortress.” We’re big fans of gaming crossovers, and this TF2 x Fall Guys crossover looks super fun already. The Scout outfit will apparently be earned individually, but owning the full set will take some time to piece together. If we had to pick a specific piece of the Scout gear to focus on, it would be his baseball cap that somehow doesn’t fly off of his head as he sprints around the battlefield.

Team Fortress 2 has been out of the mainstream for a while, but this upcoming crossover with Fall Guys is a fun way to keep people talking about the Valve shooter that inspired games such as Overwatch and Bleeding Edge. Fall Guys has exploded in popularity recently, primarily thanks to a free offer from PS Plus and the wacky and intense gameplay. Even if you’re able to collect all of the pieces of the Scout outfit, it’s unlikely that you’ll be able to run around Fall Guys like Scout is able to run around the maps of TF2.

Will you be earning the Team Fortress 2 goodies in Fall Guys? Let us know in the comments below!