No Use Far Crying Over Spilled Information

Lately, rumors have been circulating about Far Cry 6. Particularly concerning the villain, which almost always has a spot front and center on their game’s cover art. These rumors specifically say that Breaking Bad and Better Call Saul actor Giancarlo Esposito will be the main villain. Today, a leak was briefly found on PlayStation Hong Kong’s online store. It seems to corroborate all the big rumors about the game. It has since been taken down, but the damage is done. The leak contains cover art, release date, description, and Smart Delivery upgrade. 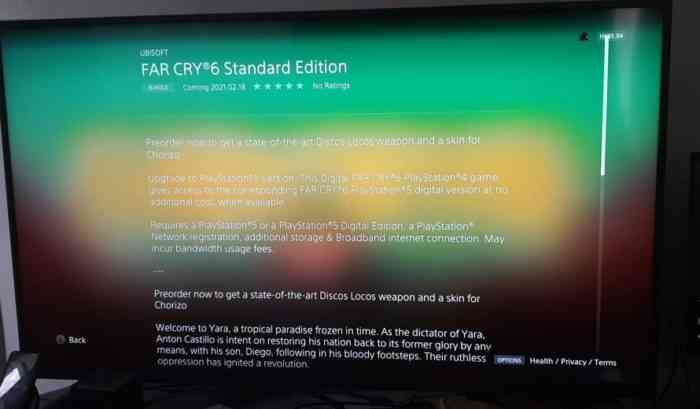 Last month, we got unverified news that Far Cry 6 would be set in the Caribbean or South America. According to the description of the game, Far Cry 6 will be set in Yara, which appears to be a fictional country. An obscured flag can be seen on the cover art (that I cannot personally identify), which might be the flag of Yara. The description also says that the player will take on the role of Dani Rojas, a Yaran freedom fighter against Anton and Diego Castillo, a father and son dictator duo.

18th February 2021 apparently. No word from Ubisoft on confirmation yet. pic.twitter.com/ab1ZfLLlTl

The release date pinned on this leak sets Far Cry 6 to launch on February 18th. It also says that “This digital FAR CRY 6 PlayStation 4 game gives access to the corresponding FAR CRY 6 PlayStation 5 digital version at no additional cost, when available.” That’s exciting, and an option that is increasingly becoming expected of games coming out in early 2021. However that “when available” part makes it kind of unclear as to when the next-gen versions will be coming out. There is still time between now and then, but Far Cry 6 might not launch on next-gen consoles alongside the current console versions. If this leak is legit, Far Cry 6 is expected to come out on February 18th for PC, Xbox One, PS4, Xbox Series X, and PS5.

Are you pleased with this leak? Let us know in the comments below.


Cyberpunk 2077 Is Returning To The PlayStation Store