The Fires of Revolution

Yesterday, during Ubisoft Forward, Far Cry 6 was officially revealed with a very tense trailer. It set the stage with a setting of civil unrest and the iron fist of a dictator. Hot on the heels of the reveal, Ubisoft is making Far Cry 6 available for pre-order in its various editions. There are four different editions for players to choose from across the different platforms. Not all editions can be pre-ordered right from the get-go, but perhaps at a later date. Just the details about what is included with the different editions reveals quite a lot about the game. 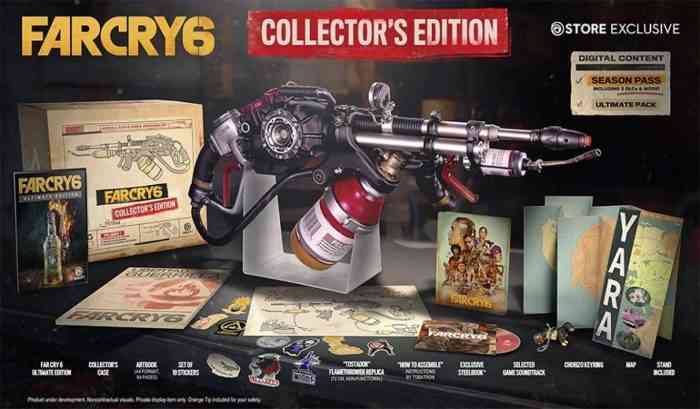 When pre-ordered, the Standard Edition comes with a couple of in-game bonuses: Discos Locos (a deadly disc-launcher) and Libertad Chorizo, a differently-abled puppy with a wagon where his hind legs should be. The Gold Edition comes with the season pass, which includes 3 DLC packs “and more”. The Ultimate Edition comes with the season pass and three cosmetic packs: the Croc Hunter Pack, Vice Pack, and Jungle Expedition Pack, which appear to have different outfits, weapons skins, vehicles, and companions. The Collector’s Edition comes with everything above plus a lot more. The centerpiece of this edition is the (non-functional) “Tostador” flamethrower. It also comes with assembly instructions for the flamethrower, a 64-page art book, a set of stickers, the soundtrack, a Chorizo keychain, a map of Yara, and a steelbook case.

All the different editions on Ubisoft’s website have a checklist of what comes with it. The steelbook case is unchecked for each of them, so it remains to be seen how fans can get it. The Standard Edition costs $59.99, the Gold Edition costs $99.99, the Ultimate Edition costs $119.99, and the Collector’s Edition costs $199.99. Those are the prices on Ubisoft’s website, but may vary between retailers. There is also the option to get Far Cry 6 through Uplay+, which is the equivalent of the Ultimate Edition. Far Cry 6 will be coming out on February 18th, 2021 for PC, Xbox One, Xbox Series X, PS4, and PS5.

Which edition do you have your eyes on? Let us know in the comments below.

Skull and Bones Re-Reveal Date Has Been Leaked