Ubisoft has had a rough couple of weeks. A bunch of allegations of misconduct from within, dismissals because of said misconduct, Far Cry 6 was prematurely leaked on the PlayStation Store, and the reveal trailer was also leaked, all on approach to today’s Ubisoft Forward event. Now, Ubisoft made the event focused solely on the games, so they did not address anything about the misconduct allegations, but they did officially reveal the Far Cry 6 trailer. If you did not see the leak before it was taken down, you have got something to behold. 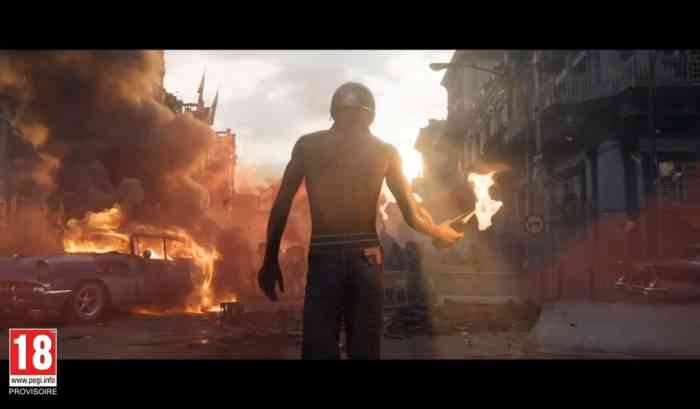 You may have heard that Breaking Bad and Better Call Saul actor Giancarlo Esposito would be playing the role of the villain in Far Cry 6. In this trailer we see Anton Castillo in all his terrifying glory as he explains to his son Diego their role in leading the country of Yara. Anton is the dictator of Yara, a fictional country inspired by Cuba. The trailer shows Diego leading his life as a relatively normal boy, before his father comes in and hands him a grenade. Outside their home, Yaran citizens are rioting and fighting against riot police. Anton explains the components of the grenade; the shell, the fuse, the handle, and the pin. He pulls the pin, forcing Diego to hold the handle down. The two walk out to the balcony overlooking the city, as Anton explains to Diego how their people need to be controlled and held in place, like the grenade handle. After making sure Diego understands, Anton makes his son throw the grenade into the crowded streets.

Boy howdy, that trailer is tense. The trailer does not reveal any official release date, but the leak claims that it will launch in February 2021. Far Cry 5 will be coming out for PC, PS4, PS5, Xbox One, and Xbox Series X.

How did you like the reveal trailer? Let us know in the comments below.