Stylish Combat and Platformer Action in a Steampunk City

Gestalt: Steam & Cinder, an upcoming 2D action-adventure RPG from indie team Metamorphosis Games and publisher Sold Out, will have a playable demo out on Steam tomorrow, June 16, as part of the Steam Game Festival.

The demo will be available until Monday, June 22, when the Festival ends, and the full game will see releases for Nintendo Switch, PlayStation 4, Xbox One, and PC sometime later this year.

For now, you can get a taste of Gestalt: Steam & Cinder’s gameplay through the debut trailer below:

As seen in the trailer, the game is a steampunk fantasy with elements of 2D platforming and action combat. Players will step into the boots of mercenary Aletheia, as she unravels a conspiracy at the heart of the Steam City, Canaan, that threatens the very survival of humankind. Among the many adversaries she’ll face — with pistol and sword in hand — are members of a nefarious syndicate, an army of mechanical Clockwork soldiers, and the elite Vanguard serving the city’s corrupt nobility. 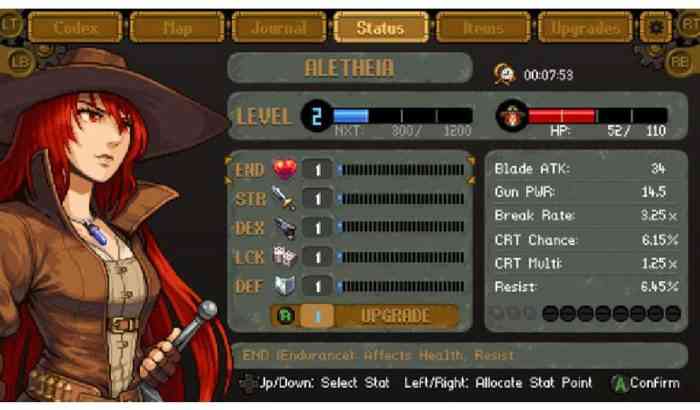 Both the visual style and gameplay design hearken back to 16 and 32-bit classics, which Metamorphosis Games said inspired Gestalt: Steam & Cinder. With their debut, they promise to deliver satisfying combat sequences as well as an engrossing, choice-driven narrative filled with intrigue and quirky characters  — all in a stylish pixel-art package.

No Place For Bravery Review – A Blood-Soaked Trek For Redemption
Next
BloodRayne Getting Resurrected Thanks to Ziggurat
Previous
Ran: Lost Islands is Now Free to Play On Steam