The Harry Potter’s Quidditch inspired Broomstick League has joined Steam early access today. Blue Isle Studios are the developers behind this Rocket League competitor, with titles such as Slender: The Arrival and Citadel: Forged under the belt as well. The studio has also confirmed an upcoming Xbox One and PS4 release but they have yet to confirm a date or if it will get the same early access treatment as PC. Broomstick League’s early access is available exclusively on Steam with a 10% discount for launch week right now. 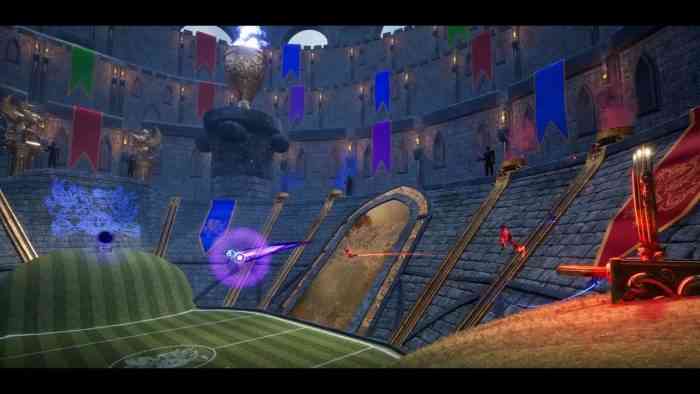 Broomstick League will likely appeal to fans of the 2003 release of Harry Potter: Quidditch World Cup title that was on PS2, GameCube and Xbox. The early access launch trailer for the aerial soccer game shows off some skills that players can use to gain the upper hand and it includes different brooms and poses that gamers may unlock through various methods in the future, teasing some DLC options that Blue Isle Studios may look at down the road. It’s possible that the game will become an esports sensation similar to how Rocket League came along and shook up the gaming tournament formula.

Contrary to Rocket League, the Broomstick League arenas will look medieval and fantastical, with portals that act like nets on either side of an oval ring. Banners hang on all sides of the arena, presumably representing both teams in the match. Similar to Rocket League, these banners heavily follow the classic Red vs Blue conflict but as a result, the in-game characters appear to be vastly customizable. Broomstick League had a brief closed beta period in December and it’s likely that the early access will continue to get Blue Isle Studios valuable feedback for balancing and bug fixing before an official release.

Are you a Quidditch fan that’s eager to try Broomstick League? What kind of customization options do you expect to see from this game? Let us know in the comments below!