The second season of Samurai Shodown DLC is kicking off at the end of this month. Last month, SNK released the second season pass trailer, revealing three of the four upcoming DLC characters. Last week, they released a trailer focused on the first DLC character of the season, Mina Majikina. Mina is an exorcist who uses a bow in battle. She first appeared in Samuari Shodown V in 2003. In her past appearances she had both her eyes, but now her right eye is covered by bandages. It doesn’t seem to affect her aim though. 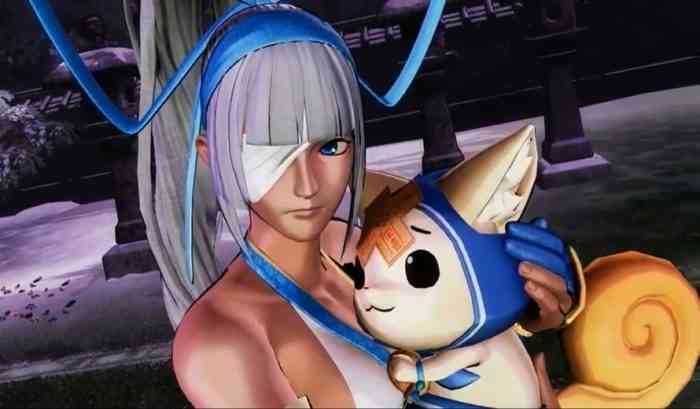 The music and Mina’s introduction in the trailer makes her out to be a youthful and innocent fighter, despite the game’s violence and excessive blood spatter. She appears with her companion and only friend, Chample. Her style of combat shows Mina using her bow both with ranged attacks and up close, physical attacks. Mina’s story is a pretty sad one. One day after hunting a demon, she returns to her village to find it in ruins. Among the wreckage, she finds Chample. After befriending him, she discovers that Chample is the demon that destroyed her village and killed its inhabitants. She avenged the villages by seemingly destroying Chample and then was thought to have taken her own life. As we can see, she is alive and well, and so is Chample. Now, Chample has two seal papers on his forehead, likely keeping his evil power at bay.

As mentioned above, Mina is the first of four DLC characters in season 2. The next characters will be Sogetsu Kazama and Iroha, followed by a character that has yet to be revealed. Mina will become playable on February 26th. Samurai Shodown is available on Xbox One, PS4, Nintendo Switch, and Stadia.

Which Samurai Shodown character is your favourite? Let us know in the comments below.