Where Do You See Yourself in 3 Months? 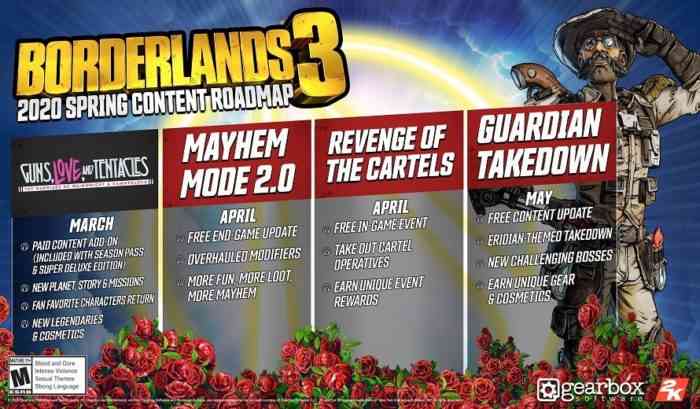 Starting of the roadmap is Guns, Love, and Tentacles, which we were shown yesterday. It includes a new planet, story, familiar characters, and new legendaries and cosmetics. In April we are getting Mayhem Mode 2.0, which appears to update the endgame content by adding new modifiers and gear. Later in April, there will be an event called Revenge of the Cartels, which there is very little information for, but supposedly different enemies will populate the Borderlands. In May, Vault Hunters will be able to take part in the second Takedown. This time, the enemies will be Guardians. Last time, players faced off against Maliwan forces.

We’re just getting started! Check out #Borderlands3’s Spring Roadmap along with all the other exciting news from #PAXEast in this recap of the Gearbox Main Theater Show.
➜ https://t.co/8vww5bi7Kw pic.twitter.com/flaqBAB9sr

The next major Borderlands 3 DLC releases on March 26th, a few months after the previous one. This roadmap will bring us to June, which would likely be the month that the third DLC launches. Borderlands 3 is available on PC, Stadia, Xbox One, and PS4.

What over the next few months are you most looking forward to? Let us know in the comments below.