One of the most anticipated features of GTA V before its launch was the prospect of pulling off heists with your friends. Despite this, it took Rockstar years before heists were available for players. Still, heists seem like a drop in the bucket when compared to all the content the game has to offer, paid or otherwise. With the release of Red Dead Redemption 2 and the rumors surrounding a GTA VI reveal, players are wondering how much time Rockstar will spend updating GTA V. The newly announced Diamond Casino Heist is leading some to think it may be a finale for the game. 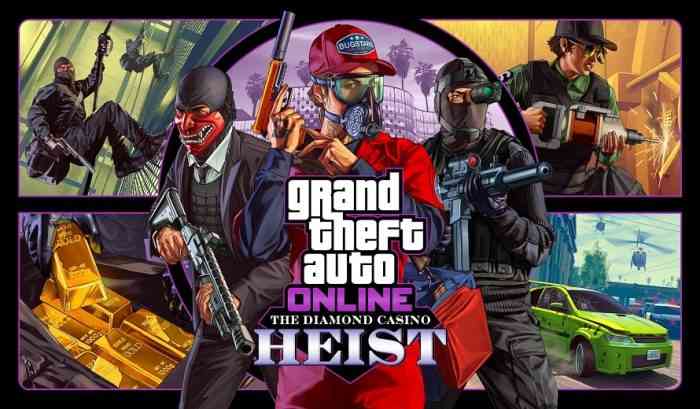 Yesterday, Rockstar Games tweeted out an image for the new heist with the caption “Prepare yourself for the biggest, most audacious, most complex criminal operation ever to hit Los Santos.” The previous heists had some pretty intense and epic moments, so if Rockstar is intending to kick it up from there, it may be their way of going out on a high note. According to the announcement for the Diamond Casino Heist, there will set up for the operation will have some customization to it. This means there won’t be a fixed process or set of missions for the heist.

Even though players will be able to choose their course of action, Rockstar says there will be instances where plans have to change on the fly. “Even if the best laid plans go sideways, you’ll have the opportunity to keep the mission afloat without failing by shooting your way out with your remaining team lives, all allowing the Heist to be highly replayable with new scenarios unfolding each time.” GTA Online’s Diamond Casino Heist will be live on December 12th.

Will you be getting the crew back together for one last job? Let us know in the comments below.

What’s Next for Online Casino Gaming and Gambling?
Next
Young Matilda Kimber Added to the Cast of the Mortal Kombat Movie
Previous
Dreams Early Access Ending on December 7th