As many Mortal Kombat fans are aware, the new movie is filming right now in Australia. It’s always good for a country’s economy when movie studios choose to film there, so Australian Members of Parliament Steven Marshall and Paul Fletcher made a visit to Adelaide Studios where the Mortal Kombat movie is being filmed. The visit appeared to be in support of the filmmakers, but in reality it was to leak information! Well, that probably wasn’t the intention, but some accidental camera angles shed some light on unannounced characters. 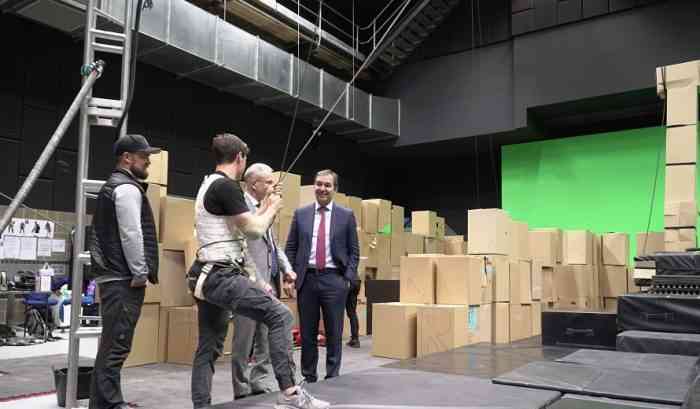 In the image above, we see two stunt crew members, Paul Fletcher, and Steven Marshall. In the far left of the frame, we see four pieces of character art. The characters appear to be Reptile, Reiko, Goro, and Kabal. None of these characters have been announced or revealed before now. The cast of characters from the Mortal Kombat universe is expansive to say the least. While the movie certainly will not include all of them, it already feels comfortably crowded as it is.

Part of the #Adelaide Studios has been transformed into a stunt person’s playground for #MortalKombat .
I joined @PaulFletcherMP to get a glimpse of the impressive work the stunt crew are doing to help create the action sequences for this highly anticipated movie. #SAFilm pic.twitter.com/eBX916mj2S

So will these characters actually be in the movie? Reference art certainly hints at it, but does not necessarily confirm it. They could just be there to reference art styles and lines for creating a set or other design component. That being said, we certainly hope this means they are in the movie. Mortal Kombat will hit theaters in March 2021.

Which Mortal Kombat movie character is your favourite? Let us know in the comments below.