Shred Along a Magical Mystery Tour in the Artful Escape

Developers Beethoven and Dinosaur unveiled more details alongside a new trailer for The Artful Escape at Xbox’s XO19 event in London. The bright neon runner platformer known as The Artful Escape follows Francis Vendetti, whose uncle was a legendary folk singer. His struggles to reconcile with his uncle’s legacy before his own performance is what inspires the psychedelic and bright visuals across the game. Gamers will shred across many strange landscapes within Francis’ mind for inspiration, shredding a guitar the whole way through the levels that feature an array of different songs. There’s no release date for The Artful Escape as of now but it will be releasing in 2020 on Xbox One and Apple Arcade. 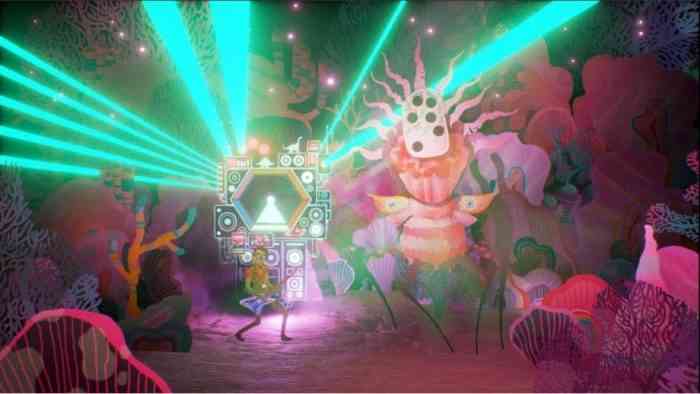 Francis Vendetti is a teenage guitar hero in the making who sets out on a psychedelic, multidimensional journey to inspire his stage persona. Gamers will encounter very unique and diverse 2.5D stages as they shred and run along to the sound of an equally diverse soundtrack. We’re impressed by many of the visuals of this psychedelic hallucination of a game that is reminiscent of the most intricate and beautiful drug inspired art.

Gamers will platform across heads that open similarly to South Park’s Canadians but resemble the Handsome Squidward meme to jam alongside fury yeti’s and luminous, four-legged aliens spewing green clouds. Different things will give gamers a speed boost along the platforming sections such as beams of light that fire Francis like a projectile or a more classic means of transport: a skateboard. The way Francis Vendetti gets prepared to play a performance makes us wonder what he does to prepare for a party.

Does The Artful Escape look like a fun 2.5D platformer to you or is it way too out there? What’s your main method of getting prepared? Let us know in the comments below!

Big Changes Are Coming to the Xbox Game Pass

Game Pass Gearing up for a Good February