If there is any game series that lends its themes and styles to Halloween, its Mortal Kombat. Otherworldly creatures, mystic abilities, blood and gore, and multiple costumes has All Hallows’ Eve written all over it. Developer NetherRealm Studios is taking advantage of the occasion with Mortal Kombat 11 Halloween skins. It appears that Kabal, Jade, and Liu Kang will be getting special skins that are Halloween themed. In the trailer below, we see Wicked Witch Jade, Psycho Killer Kabal, and Calavera Liu Kang. Those are the only costumes shown, but it is unclear if other characters will have their own Halloween costumes. 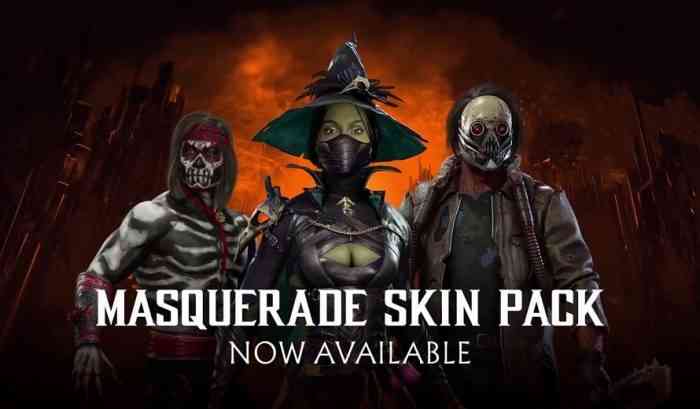 The skins come in the Masquerade Pack, which is available right now. There is an event to coincide with these skins as well. Starting on October 25th, there will be four additional boss fights will Halloween modifiers. These modifiers include things like witches flying by on broomsticks, bats, pumpkins falling down from the top of the screen, headstones rising from the ground, and black cats scurrying across the screen. So far, no word on how long the event lasts. It will likely be available at least until Halloween and perhaps a little longer.

In other Mortal Kombat news, the multiplayer Team Raid mode launches tomorrow. It is a free update for all players and you can read about it here. Mortal Kombat is available on PC, PS4, Xbox One, Nintendo Switch, and is in development for Google Stadia.

Will you be getting the Masquerade Pack? Let us know in the comments below.