Jeopardy used the instruction booklet for the original Tetris for one of their questions this week. The question, pictured below, used the alleged names of the famous Tetris blocks as clues to the game being described. Pretty cool, although wrong? Yup, Jeopardy used a fake Tetris fact on national television. 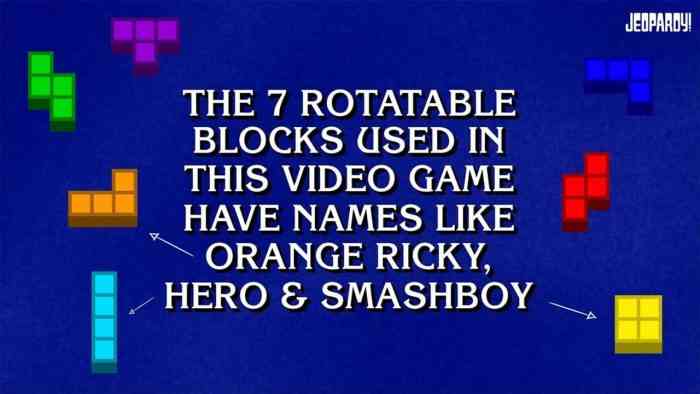 To be fair, we were all taken in by this one for a hot minute. Someone posted a picture of the original Tetris instruction booklet, highlighting a page describing the blocks. Apparently they have names! We should have known that Orange Ricky, Hero, Blue Ricky, Teewee, and Smashboy weren’t like, actual terms from the game.

But it was just so alluring. Just for a moment, couldn’t you picture the heady mix of slapstick desperation and cruel apathy needed to reach this point in a marketing meeting? Even the official Tetris Twitter account was forced to respond. It’s probably fine, right? Surely there’s never been a time before this one where Jeopardy was dredging up facts of dubious origin as questions in their show? Regardless, the dizzy dream of Smashboy as Tetris canon is now dashed against the rocks. He’ll just be “O” forever, like a chump.

Tetris Royale Is Tetris Battle Royale for iOS & Android
Next
Celebrate 25 Years of PlayStation With Brand New Merchandise on Geekstore
Previous
Star Wars Jedi: Fallen Order Not A Memory Hog After All