Will Feature Cross-Platform Multiplayer, A Co-op Mode, and Much More!

Tetris Effect: Connected, the critically acclaimed game which puts a twist on the classic Tetris game, releases today on the Nintendo Switch.  The game expands on the classic tile-matching puzzle gameplay by adding a music/element rhythm element, multiplayer, and many more modes. 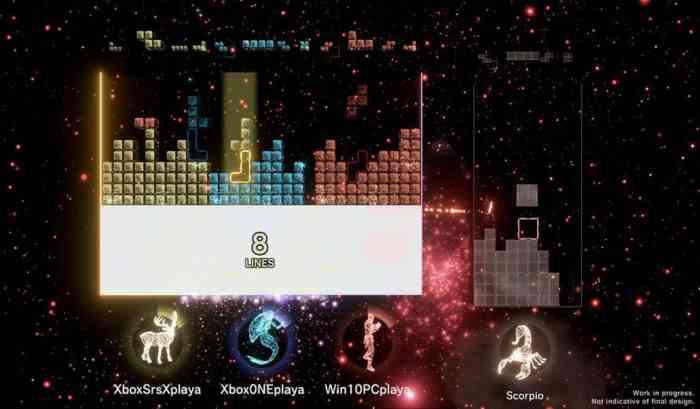 Currently, Tetris Effect: Connected has an 88% Metacritic Score, and is the enhanced version of the already praised Tetris Effect game.  If you’re wondering what’s so special about the game, it essentially is a music-themed version of Tetris and ties gameplay heavily to the beat of the music.  In addition, there are many different battle stages which each feature their own visuals.

Before today, Tetris Effect was released on the Playstation, Xbox, Windows, Playstation VR, and Oculus Quest Platforms.  Now, you can pick up the game for $39.99 on the Nintendo Switch store.  There are 10+ modes which launch with the Nintendo Switch version, including one on one battles, a co-op mode, and a ranked mode.  Even better, there will be cross-platform multiplayer so you can play with your friends on any platform.

As described by the Nintendo store page, Tetris Effect brings a great twist on the classic game: “Music, backgrounds, sounds, special effects—everything, down to the Tetris pieces themselves, pulse, dance, shimmer, and explode in perfect sync with how you’re playing, making any of the game’s 30+ stages and 10+ modes something you’ll want to experience over and over again.”

What do you think of Tetris Effect: Connected arrive on the Switch? Are you excited to play the game on the go? Let us know down in the comments, or hit us up on Twitter or Facebook.