Big news for superhero games this weekend; Ms. Marvel was announced for Marvel’s Avengers, Iron Man VR gets a gameplay trailer, and now we got a look at the Iron Man VR pre-order bonuses. Who’s richer at this point, Marvel or Tony Stark? You can pre-order the game right now, but choose where you buy it carefully. You could end up will all the bonuses or with none of them. There is the Standard and Deluxe Edition to choose from, but they price difference is pretty narrow. 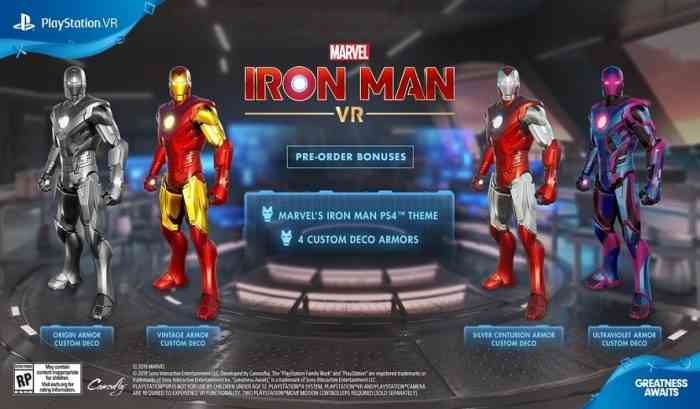 First off, pre-ordering either edition through the PlayStation Store gives players a free month subscription to Marvel Unlimited, an Iron Man VR PS4 theme, and 4 different cosmetic suits. These suits are the Origin, Vintage, Silver Centurion, and Ultraviolet Armours. Pre-ordering the Deluxe Edition gets players a Deluxe Iron Man VR PS4 theme, the Iron Man VR Digital Soundtrack, 12 in-game Research Points, and 4 other cosmetic suits. These suits, which are different than the standard pre-order suits, are the Golden Avenger, Black Centurion, Sun Stinger, and Stealth Armours. The 12 Research Points are what grant players extra augments and power-ups in the game.

Which edition will you get? Let us know in the comments below.