Has Juliet Starling from Lollipop Chainsaw being suspended from Twitch? How about Mai Shuranui from King of Fighters? No? Any woman in tight or revealing clothes from any game? Of course not, that would be silly to regulate the dress of fictional characters. Now this is old news, but for some reason real women who stream on Twitch are constantly being criticized, harassed, and even disciplined for how they dress on their stream. Twitch streamer Quqco has recently been suspended for a Chun-Li cosplay she wore during one of her streams. Time to whip out those double standards, baby. 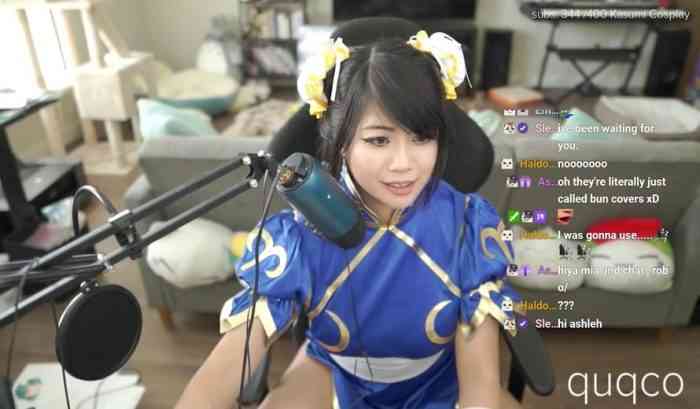 Street Fighter, the series in which Chun-Li appears, has never been removed from Twitch for sexual content or nudity, which is no surprise because there is none of that. However, after wearing a Chun-Li cosplay, Quqco received a notice of a three-day suspension from Twitch citing “sexually suggestive content or activities”. According to this notice, the thigh-slit on classic Chun-Li costume was too high. Quqco often streams herself drawing various depictions of her favourite games. Since her account is currently disabled and the video of the stream in question is inaccessible, it is hard to find the exact frame that was too suggestive. There are a few images from the stream and personal photos uploaded by Quqco that shows a a very covered streamer, so almost no one understands why exactly she was suspended.

She was suspended previously for cosplaying as Mai Shuranui from King of Fighters, who does have a more revealing outfit that Chun-Li. However, like the Chun-Li stream, Quqco was simply sitting down and drawing. In an email to Kotaku about the Mai cosplay incident, Quqco claims she was sexually harassed. Not in such a way that viewers were making inappropriate comments toward her, but that sexual content and behaviour was being projected onto her, which appears to be what is happening now.

What is your reaction to Quqco’s outfit in question? Let us know in the comments below.