Ghost Recon Breakpoint isn’t out yet but Ubisoft got ahead of the curve on Tuesday by revealing the game’s post-launch roadmap. The roadmap includes new campaign missions, raids, faction missions, new character classes for the PvE and PvP modes, and live events.

The Year 1 pass comes with the Gold, Ultimate, and Collector’s editions of Ghost Recon Breakpoint. 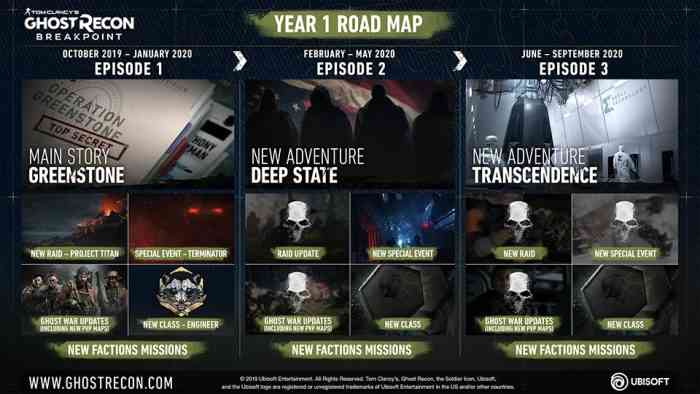 According to the roadmap posted above, Year 1’s content will be doled out in episodes and each episode has a campaign mission. Ubisoft said that these missions will each last around five hours and players can play the first hour of a campaign for free. The first mission, “Greenstone”, can be played when the game launches on October 4th.

When it comes to the monthly faction missions, each one will advance the “narrative arcs” of the game’s factions.

As for raids, the first one is a 4-player co-op mission titled “Project Titan” and it takes place on an active volcano for some reason. There’s also the first live “special” event which will (presumably) have players face off against the Terminator.

What do you think of this roadmap? Go ahead and speak your mind in the comments section below.