Gears of Pride – Tons of LGBTQ+ Flags in Gears 5 Multiplayer

The L Word is Lancer

In the past, multiplayer games have allowed players to customize their online profile. They usually have banners, medals, badges, titles, you name it. They allow players to show a small window into their identity. I’ll never forget getting killed in Modern Warfare 2 and seeing the marijuana banner of DragonXSniper69 over and over. The newest installment of the Gears franchise will have similar customization for online profiles. The big news is that there will be a bunch of LGBTQ+ flags in Gears 5. Not just rainbow flags either; there are a total of 19 pride flags representing different sexuality and gender identities. 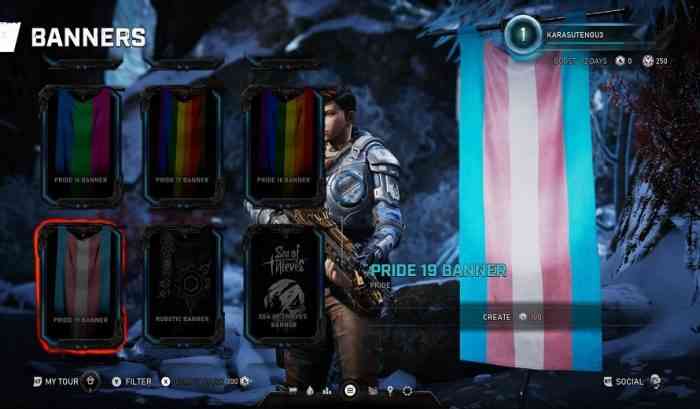 HEY GEARS HAS FUCKING PRIDE FLAGS IN GAME WHAT pic.twitter.com/vRhDSm3Xzy

Every June 1st, we are used to seeing companies change their logo to a rainbow-fied version and then changed back on July 1st. Sometimes games will have a Pride event during the month of June. While it’s nice to see them at least pretending to show support, it’s temporary, but in Gears 5, these banners will be launching with the game tomorrow on PC and Xbox One. You can check out our Gears 5 review here.

Which flag will you fly? Let us know in the comments below.