You’ve heard of twin-stick shooters, but have your heard of twin-stick farming simulators? Atomicrops sounds like someone took most popular things in gaming last year and made a Frankenstein’s monster with it. Think about it: post-apocalypse, farming, pixel art, roguelike, survival. This shouldn’t work, but it looks like it does. Developed by Raw Fury, they have put Atomicrops on Early Access on the Epic Games Store today. Raw Fury has also put out a launch trailer to accompany its release. 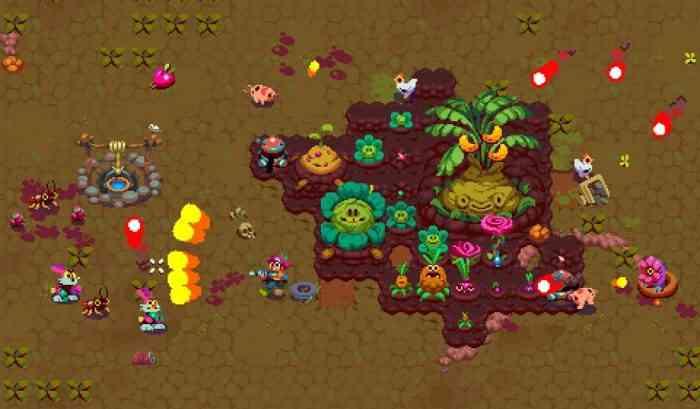 Duel-wielding and multitasking seem to be key features in the game. The duel-wielding is not the traditional two-gun shooting, but instead shooting while watering your plants. It seems that there will be quite a bit to juggle here. On top of tending to your crops whilst fending off monsters, players can balance their social life, though marrying is optional. From what is described in PC Gamer’s preview, it has many roguelike elements. It is stage-based in a way. There is a day/night cycle with a boss fight every few nights. After the boss fight, players can be rescued by a helicopter and brought to town where they can sell their crops, buy gear like weapons, and socialize with the townsfolk.

It is on Early Access exclusively on the Epic Games Store right now. It is unclear if there are any plans to bring it to Steam or console. If you think Atomicrops might be up your alley, do not sit on it. Starting today, there is a discount-countdown. Today it is 50% off and the discount will decrease everyday by 10% until it reaches full price six days from now. It’s all about guns and hoes, but not in the Saints Row kind of way.

Does the mash-up of gameplay elements interest you? Let us know in the comments below.


Risk of Rain 2 Leaving Early Access and Getting Price Increase