It should be no surprise that Marvel’s Avengers will have alternate costumes for the Avengers. Pretty much every Marvel game has our heroes in different outfits. This game will be no different in that way. The Character Profiles for Captain America and the Hulk that Square Enix has released even showed off an alternative costume for each of them, and you can bet that more profiles will follow. In fact, San Diego Comic Con attendees saw an image that showed other Marvel’s Avengers skins which has recently made its way onto Reddit. 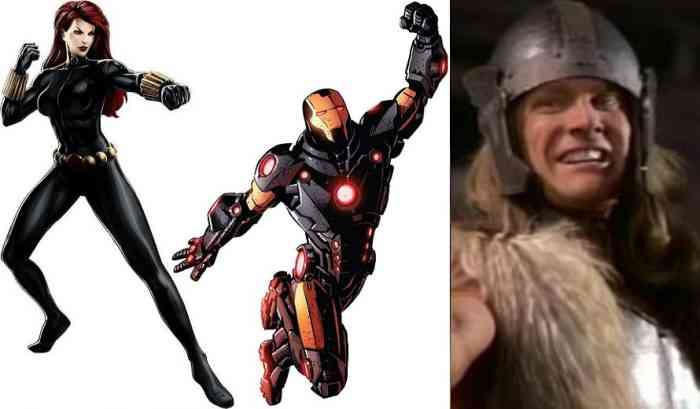 Your ol’ pal Zane is going to try to help identify these costumes developer Crystal Dynamics will be adding to the upcoming game. The alternate costume in the Captain America character profile (which I overlooked at the time) is from the Secret Empire comics, which was (in)famous for making Cap a Hydra sleeper agent. The alternate Hulk costume is a Joe Fixit look that is a 1920s gangster Hulk. Now for the unofficially released ones. Only a small part of each costume is revealed, but I think I know which ones they are (pictured above).

Starting with Black Widow, the leaked image shows gold belt attachments and gold wristbands. These are iconic features of the aptly and simply named Classic Black Widow costume. Many iterations of Black Widow across different mediums use this look, but not in the MCU. Iron Man’s armour is black with red repulsors. This would likely be either the Model 42 or 49 armours, but Model 42 has multiple repulsors on the arms while the one in the leaked image only has one, just like Model 49. Thor’s alternate costume is one we would kind of like to forget about. The white fur around the shoulders suggests it is the costume from the 1988 TV movie The Incredible Hulk Returns. It’s not a very good look for Thor because he kind of just looks like a viking and has almost no iconic features from any comics. Either way, it will be a good laugh when we see it, followed by immediate shame.

Marvel’s Avengers will be out on May 15th on Xbox One, PS4, Google Stadia, and PC. Which alternative costume is your favourite? Let us know in the comments below.


Marvel’s Avengers: Black Widow #1 Comic Is the Best in the Series Yet

Reports of Final Fantasy VII Remake Being Released Early
Next
The Last of Us Part II Event Planned for September
Previous
Trailer Drops for Kingdom Hearts 3 Re Mind DLC, Coming This Winter