EA’s Madden 20 hits online and physical stores today. In celebration of its launch, EA is partnering with Twitch to give fans some additional Madden 20 rewards. For members of Twitch Prime, players can claim NFL champion and legend Jim Brown. For the first time, Brown will be available to join Madden Ultimate Teams. If you are unfamiliar with MUT (Madden Ultimate Team), it is a gamemode where a player’s team can be customized with different players, plays, and uniforms. But Jim Brown is not the only bonus Twitch Prime members can scoop up. 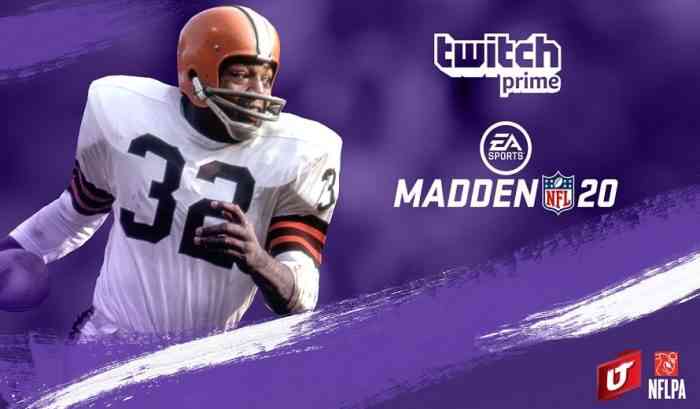 As the fresh football season kicks off (that’s not a pun, football is where the saying originates), members of Twitch Prime can pick up something else. During the first week of September, Madden 20 players can earn an in-game Twitch Prime themed uniform for their Madden Ultimate Team. Madden 20 owners can claim their very own Jim Brown when logged into Twitch here. The Jim Brown offer is available until September 9th. That link will also be where you can find your Twitch Prime uniform starting in September. While you’re there, check out all the other offers for Twitch Prime members. There might be something else you like for your other games.

Twitch Prime members can also claim the Free Games with Prime of August which include Wonderboy, Pumped BMX Pro, Maple & The Wood, and Automachef. If you are not yet a Twitch Prime member, you can get a 30 day free trial here for Amazon Prime.

What does your MUT look like? Let us know in the comments below.

Skate. Will Be a Free to Play Game With a “No Barriers Approach”
Next
Modern Warfare PC Details and How Crossplay Works
Previous
Capcom May Have a New Resident Evil Game in Development