A Portable Nintendo Switch Convert Dock Has Been Crowdfunded

A Kickstarter campaign has been funded for Genki to make a pocket sized Switch dock that allows players to both charge their Nintendo Switch and keep the full television experience on the go. The funding goal of $50,000 has been destroyed by over 8,000 backers raising more than $500,000. Currently the Genki Convert dock for Nintendo Switch is priced at $49 with a USB-C cable or pay $59 for the full travel experience. The compact unit is ten times smaller than Nintendo’s Switch dock and is compatible with other USB-C devices such as smartphones, tablets, laptops, etc. The Genki convert dock is expected to be shipped by the end of the year. 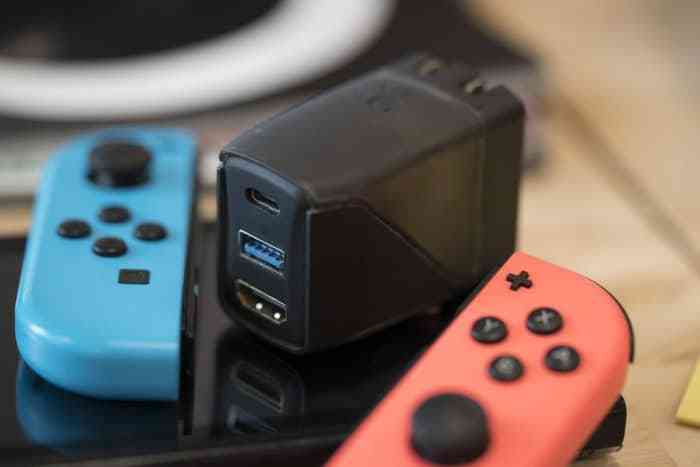 Gallium Nitride is used to allows the Genki Convert dock for Nintendo Switch to run cooler than Nintendo’s dock as the Switch plugs into the convert dock with the USB-C while the dock connects to the TV through HDMI. Not only is the Convert dock used to charge devices other than the Nintendo Switch, it can also use the HDMI output to display on the TV as well. The USB 3.1 port is also used to pass data, allowing Kickstarters to hook up flashdrives, mice and other USB 3.1 accessories. The team at Genki worked closely with producers of the official Nintendo Switch AC adapter and other developers of docks to find premium components to maximize reliability and minimize overheating with a dedicated chip managing heat and voltage.

Many third-party Switch docks don’t manage heat appropriately, causing even more issues than the Nintendo Switch dock has. Because the charging is done through USB-C and the data processing is done on the convert dock, Genki claims to have solved this heat issue. Their Kickstarter page can  be found here.

Have you ever had any issues with your Nintendo Switch dock? Have you ever wanted it to be pocket-sized like the Switch unit itself? Let us know in the comments below!


PAX East Attendees Can Get an Animal Crossing Tote Bag