The co-op zombie shooter World War Z is looking more and more packed with flesh-eating hordes. In today’s latest update, the developer has brought new footage and an overview of how to survive the undead onslaught. 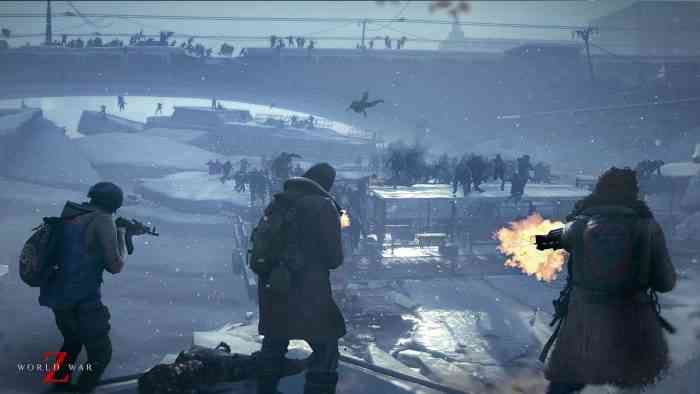 Judging by the footage, which is available below, World War Z will fill the player’s screen with zombies at every turn. Fortunately, the creative director from Saber Interactive has arrived to give us a few survival tips. For starters, every mission should commence with stealth. Guns blazing isn’t an option unless you’re ready for a dog pile. Also, the only way to procure resources is to venture off the beaten path. Every survivalist will come across hidden options throughout varied locations, but things can easily ago awry.

According to Saber Interactive, the world is guided by a responsible AI (director) that reads the players’ status and proceeds accordingly. If the team is doing very well, enemies get harder. If the team’s health is low, an extra turret spawns. Conditions may constantly vary from, session to session, moment to moment. While some exploration can offer a payoff through the loot, enemies of higher difficulty will immediately force players to swap tactics. In many ways, World War Z is a fast-paced and unrelenting arena. Sometimes, the choice to stand and fight isn’t always the best option. If you survive the chapter, however, you’ll gain access to valuable perks. Progression seems rewarding enough, provided you can escape the avenues of undead.