Slow and Steady or Fast and Reckless?

There’s an old saying: slow and steady wins the race. But what happens when the race is replaced by a battle of two teams spraying ink? Although a specific scenario, the new Splatoon 2 Splatfest aims to answer that. Hare and Tortoise are the new teams for the upcoming Splatfest. Last month we saw Knights facing off against Wizards. Wizards beat out the Knights in both the in Voting and Normal categories, but Knights won the in Pro category. This gave Wizards a 2-1 win over the Knights. Now, we are awaiting the start of the Tortoise vs Hare Splatfest. 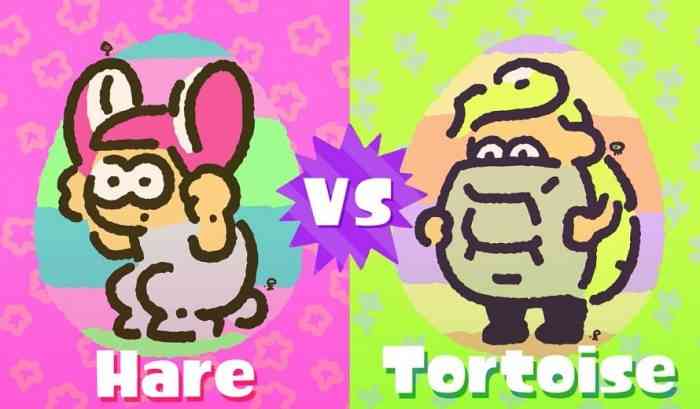 As the classic story tells, the Tortoise beats the Hare in a race. Hare is winning, but takes a nap by the finish line and sleeps while Tortoise overtakes him and wins. We probably will not see the same events play out in this rematch as in the original match up. Our Splatoon Inklings Pearl will be battling for the Hare and Marina will be on the Tortoise team.

In previous Splatfests, players would be given t-shirts for their Inkling to wear. The Knights vs Wizards Splatfest gave Inklings the opportunity to dress in full plated armour or magical robes, if they had the correct Amiibos. Unfortunately, no such luck with outfits this time around. It’s back to team t-shirts this month. The face-off runs on the weekend of April 19th to 21st.

Which team will you join? Hare or Tortoise? Let us know in the comments below?