Being an Iconic Character Does Have Its Perks

In a few months, we will be coming up on Dead by Daylight’s three year anniversary of its launch. Despite the limited choices in game modes and in contrast to its name, Dead by Daylight has had quite a long lifetime. Its longevity can be attributed to the updating list of monsters and villains to be played as. New maps corresponding to their villains and depictions of iconic horror movie locations keep fans coming back as well. Developer Behaviour Interactive is not letting this game die yet. A new Dead by Daylight survivor is being hinted at through a leaked list of perks. 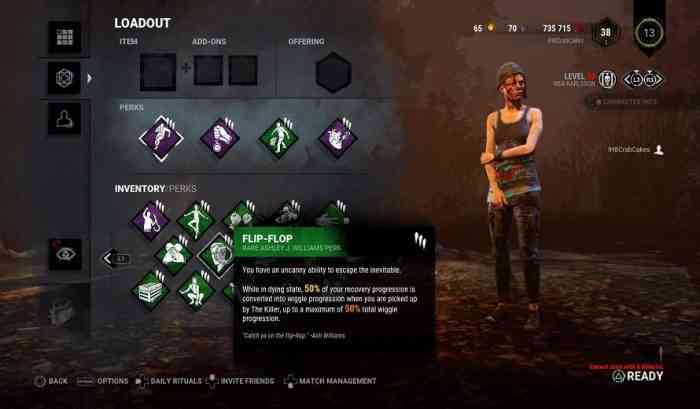 Three perks for “Ashley J. Williams” have surfaced on Reddit. Ash is of course the iconic protagonist from the Evil Dead series. The names of these perks are Flip-Flop, Mettle of Man, and Buckle Up. As mentioned in the Reddit thread, these are quotes from the Evil Dead TV show. This causes some speculation that if there is a villain, that it would be from the show. The show takes place over thirty years after the events of the movie trilogy, so which version of Ash will we get? Movie or TV?

So far, no images of Ash have surfaced, just his perks. No killer has been announced yet either. Many of the previous killers have new maps to accompany them. Will fans get a location with this new Evil Dead pack? The cabin in the woods from the first movie would be a good choice. Regardless of what we do get, it is doubtful that we will see Ash with a chainsaw mounted on his hand.

Will the inclusion of Ash be enough to get you back into Dead by Daylight? Let us know in the comments below.


New Dead by Daylight Killer Will Be Set Loose Next Month