Frogwares is back with a new detective game. It seems like they have a thing for mystery-centric games. Frogwares is the developer behind almost a dozen Sherlock Holmes games. In today’s new The Sinking City gameplay trailer, the similarities between it and the recent Sherlock games are very obvious, for better and worse. I played one of those games, Sherlock Holmes: Crimes and Punishments. What I can say about it is that is certainly is a game and the mechanics work. I can’t quite say that it is necessarily fun or rewarding, but it is indeed a game. 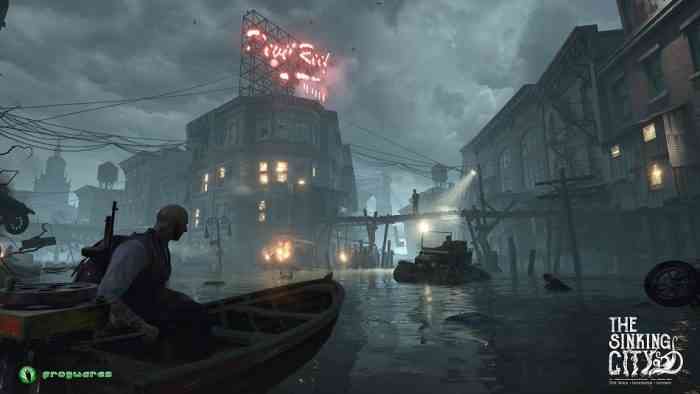 Let’s try to reserve judgement for The Sinking City. While it shares mechanics and themes with the Sherlock games, The Sinking City has its own world and look. It takes place in an alternate 1920s Oakmont, Massachusetts where the supernatural is deeply ingrained into the world. Monsters flood the city figuratively, and water floods it literally. Not only does the player encounter monsters of the world, the main character Charles Reed faces monsters of his deteriorating sanity. Charles is on a personal and professional journey to find a way to cure himself of the aforementioned cuckoo-ness.

Like I mentioned above, The Sinking City shares quite a few mechanics with the Sherlock Holmes games. This includes various interfaces like a notebook for recording all case-related evidence and leads. The Mind Palace feature is also present. The Mind Palace is a Sherlock Holmes plot device that allows him to make all sorts of connections between pieces of evidence, details, and information. What will make The Sinking City very different from the Sherlock games is that there is  “no hand-holding”, meaning that there are no prompts for how the player should approach quests, who to talk to, or what decisions should be made. The Sinking City is aiming for a March 21st release date, but there are rumors of a delay.

Will you be trying out The Sinking City? Let us know in the comments below.


Frogwares Shows Off Sherlock Holmes: The Awakened In New Trailer