Rage 2 Details: A Lot of Scavenging in a World “Full of Terrible People”

Rage 2 will be a far cry from its predecessor, as every piece of footage has implied. Today, we received some elaboration on what makes the open world so unique and chaotic. For starters, it’s full of insane people whose grasp of technology varies.

In an interview with GameInformer, Art Director Jeremy Miller explained the stylized design of the new Rage installment. The studio wanted a wasteland that was insane but fun, so decided on a Cyberpunk coating over post-apocalyptic anarchy.

“A core part of the Rage world is wasteland cyberpunk. It’s not the cyberpunk world where you go into a desert, it is a post, post-apocalyptic world with a wasteland that is sometimes lush that also has a strong cyberpunk layer.”

But in order to make the game experience fun, Miller said that the design had to focus on dynamic locations. “I would rather that we have a really beautiful, dynamic world rather than super high fidelity cups, for example,” he said. The same logic applies to factions. Alongside unique locations barren and lush, the world of Rage 2 has a variety of people and groups that bring their own charm. Players will both love ’em and hate ’em. 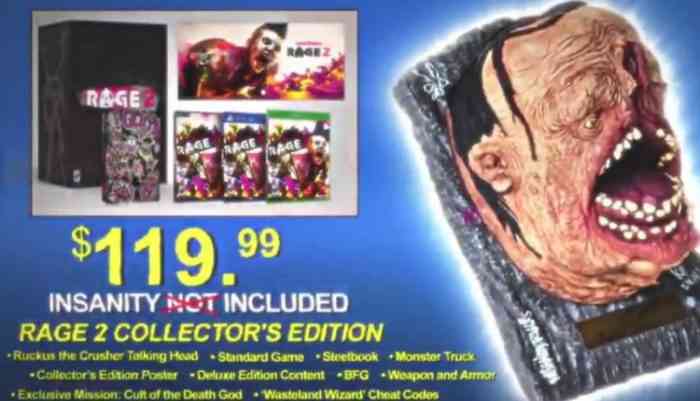 “One of our key pillars is this is about fun, and that is a huge element of crazy, but if the crazy we create is just depressing and not fun, then it’s not for Rage. It always has to have the horrific quality of, ‘oh my God! This is so awful! Why would they do this? But I can’t help but kind of like them.’ That’s the sweet spot for us.”

Earlier on in the interview, Miller hinted at the amount of scavenging in the game. Apparently, the meteor didn’t destroy everything since plenty of parts and carts littler the wasteland. All the resources factor into how the player decides to play the game.

“Rage doesn’t have a resource problem. It has an insanity problem. The world is filled with stuff. There are computers and computer parts, glass, guns, and cars. If you want to get stuff, there is plenty of it laying around and underground… People have spent years taking all this stuff and hacking it together to get it into working order. So we have this weird leveling of all technology so you’ll see people with holograms and right beside, someone has taken old smart tablet and nailed it to a wall. The world has a lot of resources, but no one knows how to use it all and people are crazy.”

Rage 2 is coming for PC, PlayStation 4, and Xbox One, and the PC version will only be available via the Bethesda Launcher. What are your anticipation levels for the game? Comment down below.