Your scientists were so preoccupied with whether or not they could, they didn’t stop to think if they should

The title and the sub-title should really be the only contents of this article, but if this is really taken to the next step, we should explore the possibilities. The FeelReal mask is a device that adds smells to a virtual experience. On the FeelReal website, it claims to simulate “hundreds of smells”. Examples range from natural smells like food, to relaxing scents such as lavender, to realistic smells such as gunpowder. I’m ready to have pleasant smells as part of my gaming experience, but my question is: Am I ready for all the other smells? 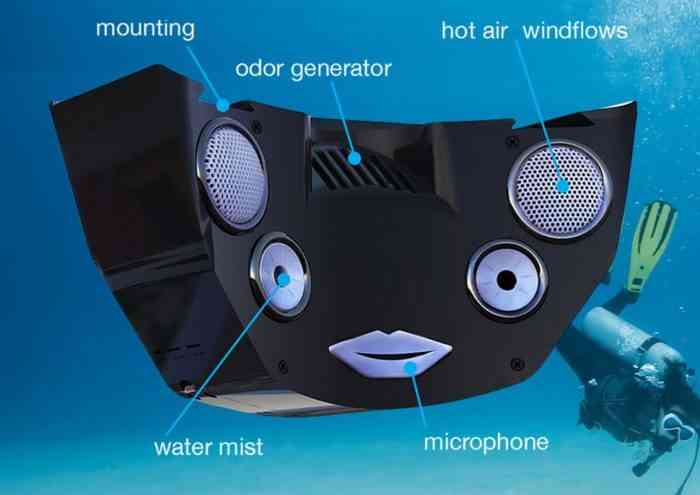 If Overcooked or Cooking Mama were VR games, this peripheral would be a big hit. Being able to smell all your creations would be nice and getting some aromatic feedback when you mess up a dish would be really immersive. On the other hand, if I’m exploring the caves and crypts of Skyrim (for the 50th time), do I really want to be as immersed? Do I want to smell the burning flesh of my victims, or the burning flesh of myself for that matter? Pre-plumbing worlds in general probably would be a no-go for the FeelReal.

But there’s more than meets the nose

I should be fired for the above sub-header. The FeelReal does claim to be compatible with all the big names of VR. The list includes Samsung Gear VR, Oculus Rift/Go, HTC Vive, and PlayStation VR. I’ve focused a lot on the aromatic aspect of this mask, but it’s functions extend into tactile sensory features. In the image above, you can see “water mist” nozzles (in case an NPC sneezes on you), and “hot air windflows” (in case an NPC farts on you). There are endless amounts of jokes that can be made, but honestly the possibilities the FeelReal suggests are pretty cool.


Ragnarock Review – Beats Done to Rock at a Hard Pace