There have been quite a few contests lately where you can test your luck to try and win an exclusive-colour Xbox One X from Microsoft. First, there was that sweet Deadpool-inspired one and then there was that limited edition Platinum one from Taco Bell, and now there’s another contest to give away a slick custom red console. 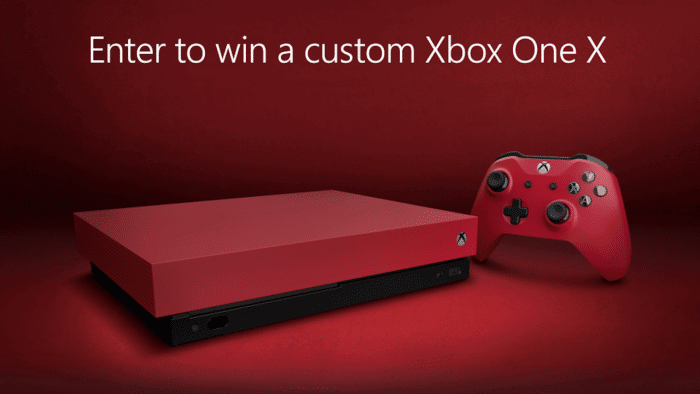 The grand prize doesn’t just stop at the console though. Microsoft is also throwing in a second matched red Xbox One Wireless Controller, a 12-month Xbox Live Gold membership, and $100 USD to spend at the Microsoft Store.

Do you wish you can have this sweet, sweet bundle? Then all you gotta do is retweet the Xbox Twitter account with the contest details and you’ll be automatically entered into the sweepstakes. According to Xbox Wire, there will be 10 chances to win but only one will take home the grand prize. Other prizes include a red Xbox One controller and a full year of Xbox Live Gold. The contest will end on November 16th.

The contest is open to residents who are 18 years of age in the US and Canada. Make sure you read the official rules for terms, restrictions, and eligibility.

Microsoft is also pushing a couple of new promotions that players can take advantage of at select retailers or their local Microsoft Store. The first is a discount of $10 USD / $15 CAD is on select wireless controllers. The second promotion involves getting three extra months of Xbox Live Gold when you buy a three-month subscription. With the power of math, that amounts to six months in total! That’s not a bad deal at all.

Will you be entering the contest? What about those current deals? Let us know in the comments below.