Today, publisher IMGN.PRO and developer Juggler Games have announced the release date for their historically influenced video game experience, My Memory of Us. Furthermore, they’ve revealed that legendary actor and voice talent, Patrick Stewart, shall narrate the game’s story. 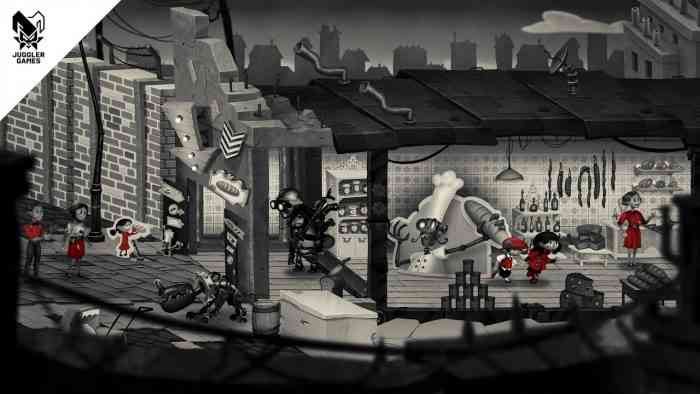 My Memory of Us is a puzzle-based sidescroller set in a city modeled after pre-second World War Warsaw. You follow two kids whose relationship and way of life are besieged by oppressive, militaristic robots. At first, the story revolves around the innocent and carefree adventures of the boy and girl. However, when war breaks out, the narrative cascades into dark subject matter made stark by the black and white art style. Essentially, the player will witness a retelling of the Holocaust through the adventures of these two children whose primary goal is reunification. Last but not least, the narration will be helmed by Sir Patrick Stewart.

“The story of My Memory of Us is a personal one to us, as our grandparents faced similar oppression World War II. This game is our ode to them and the millions of others who lived and died during this time,” said Mikołaj Pawłowski, CEO, Juggler Games. “So when it came time to cast a  narrator, Patrick Stewart was the perfect choice. His amazing acting career spans nearly six decades, and since the very beginning he has produced incredible and emotional work. His talent and skill provides the right mixture of gravitas and hope, and his performance resonates perfectly  with our game.”

Many of us know Sir Patrick Stewart for his roles as Jean-Luc Picard in Star Trek: The Next Generation and Professor Charles Xavier in the X-Men movies. But he’s also no stranger to games, having lent his voice to Elder Scrolls IV: Oblivion. What are your thoughts? Does his talent build your interest in the game? Comment down below.

My Memory of Us Features:

What Remains Of Edith Finch Coming to Nintendo Switch