An August 6th Update Will Include the Reference

A song featured in Madden NFL 19 that mentions Colin Kaepernick, the former San Fransico 49ers quarterback, has been censored to edit out his name. 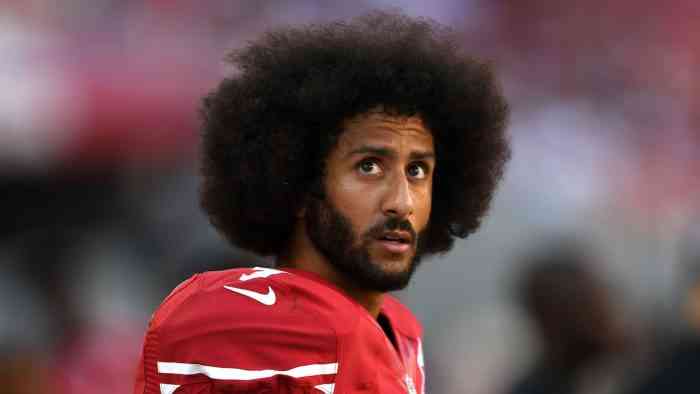 The song in question, ‘Big Bank’ by YG ft. 2 Chainz, Big Sean and Nicki Minag, is part of the game’s 31-song soundtrack. The original lyric by Big Sean is: “You boys all cap, I’m more Colin Kaepernick.” In the tweet below you can hear how Kaepernick’s name is completely scrubbed from the game.

bad enough @Kaepernick7 still not signed, but now they even edit his name out in this year’s @EAMaddenNFL during @BigSean verse, smh pic.twitter.com/3nvkB26z5r

Kaepernick made headlines in the world of football and politics for protesting police brutality when he kneeled during the national anthem in 2016. His term with the 49ers ended not long after but not before his protest shook the industry at large, causing other players to also kneel in protest and even getting the attention of US President, Donald Trump. Trump has repeatedly taken offence to players kneeling during the anthem, believing that they’re simply disrespecting the flag. Kaepernick remains unsigned after departing the NFL.

Big Sean took to Twitter to show his support for Kaepernick which you can see below. Kaepernick also replied back “Much love brother! Thank you for having my back!”

Much love brother! Thank you for having my back!✊???? https://t.co/yKz3nBMiPb

In a statement to IGN, EA has apologized for editing out Kaepernick’s name calling it an “unfortunate mistake.” An EA spokesperson had this to say:

“We made an unfortunate mistake with our Madden NFL soundtrack. Members of our team misunderstood the fact that while we don’t have rights to include Colin Kaepernick in the game, this doesn’t affect soundtracks. We messed up, and the edit should never have happened. We will make it right, with an update to Madden NFL 19 on August 6 that will include the reference again. We meant no disrespect, and we apologize to Colin, to YG and Big Sean, to the NFL, to all of their fans and our players for this mistake.”

It has been brought to light that Kaepernick’s name was also edited out of Madden NFL 18 as well.

. @EASPORTS @EAMaddenNFL scrubbed @Kaepernick7 name out of @MikeWiLLMadeIt ft @goSwaeLee “Bars Of Soap”in last years Madden game (Madden 18)? Your statement doesn’t explain your erasure of his name in TWO consecutive years! Yall are such bad liars for the @nfl . https://t.co/OjCSfo1t5F

What do you make of EA’s statement? Share your thoughts on the matter in the comments below.