Square Enix and Acquire’s turned based JRPG Octopath Traveler is set to be released real soon. Recently, a demo was available where you can play as any of the eight characters. And the best part of the demo, the progress you make in the demo transfers to full the game. Recently we sat down with Square Enix Producer Masashi Takahashi and Acquire Director Keisuke Miyauchi where they shared some of the inspiration behind Octopath’s gameplay and presentation. You can read more about that HERE. Today; however, we learned that Octopath Traveler: Wayfarer’s Edition is available again, right now. 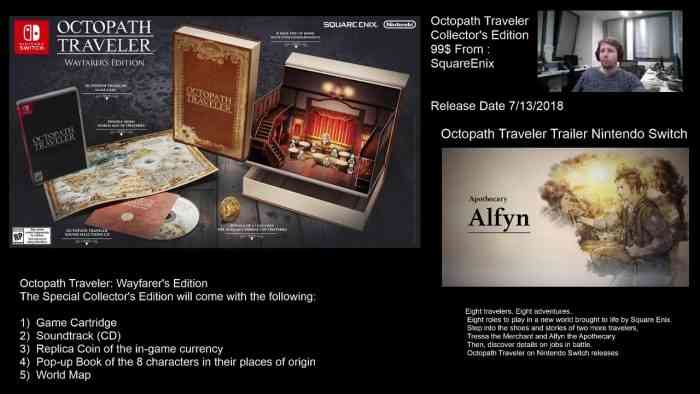 The once previously sold out Octopath Traveler: Wayfarer’s Edition is available all over again on Amazon. If you are interested, you can preorder the bundle using the following link right HERE.

Eight travelers. Eight adventures. Eight roles to play in a new world from Square Enix’s alongside the game software, this special-edition bundle contains a pop-up book, a two-side cloth map of the game world, the Octopath Traveler: Sound Selections CD, and a replica coin.

The game’s unique blend of 16-bit character sprites and three-dimensional environments stems from the idea of evolving the art style of the games they played growing up. Hints of both the SaGa series and Final Fantasy are present throughout, warranting some to initially believe it to be a Final Fantasy title in disguise. However, Ocotopath Traveler combines the best of its inspirations with eight characters wielding special abilities and differing storylines. The characters follow their own paths but interact with each other at various points throughout the narrative.