A recent interview with BioShock level designer J.P. LeBreton sheds light on the work that went into the game’s fifth level, Arcadia. According to LeBreton, he had three key requirements for the level from BioShock’s writer and director, Ken Levine: Arcadia is where Ryan kills off the plants as part of a plan to kill you; you’re trapped there until you can fix the problem; and there’s a scientist who helps you restore the plants. 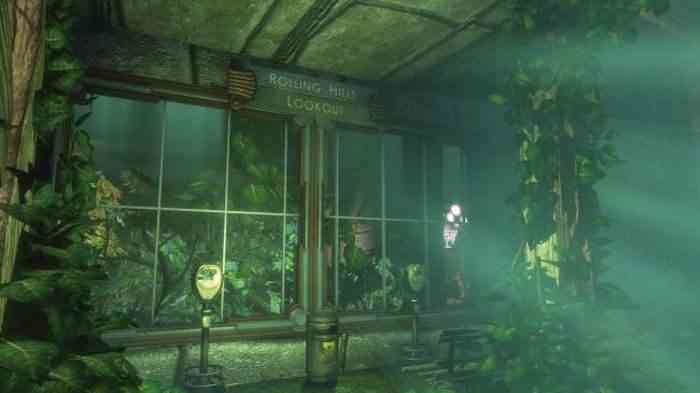 “Aside from the initial brief, I had a lot of freedom to lay out the level and orchestrate as needed,” LeBreton said.

“So many things in game development are opportunistic, run-with-it type affairs,” he continued. “Once the visual identities of the fisheries and the submarine bay in the preceding levels became clear, and once we decided the player would be entering Arcadia not via a bathysphere station but via a tunnel into the lush cemetery and tea garden, it was obvious we had an opportunity for a surprising visual moment.”

And according to LeBreton, games like System Shock 2 and the early Thief games were huge influences on its design.

“What I was interested in specifically were some of its connections to the level design of the first two Thief games (which shared some personnel with both [System] Shock 2 and BioShock), which were very sprawling, twisty and strange in places,” he said. “Not much of that survived into the finished product, other than the fact that the level is still kind of hard to navigate.”

“Over the summer of 2006 the level was rebuilt piece by piece, mostly by the 2K Australia art team, to reorganize the space,” he continued. “One key edit was to tweak the scale of the Tea Garden, for example making the corridors you move down roughly twice as wide. The main addition to the space involved splicing the entire Arcadia Glens central connecting hallway into the existing layout. The idea was “to separate the areas from one another and establish that hierarchical navigation-type idea.”