World of Warcraft is Overhauling Their PvP Progression

With the newest World of Warcraft expansion, Battle for Azeroth, nearly upon us, Blizzard want to overhaul their PvP system to give their players more visibility on their PvP ranking, with Arena bracket changes, new end-of-the week rewards, and potentially some end-of-season rewards. 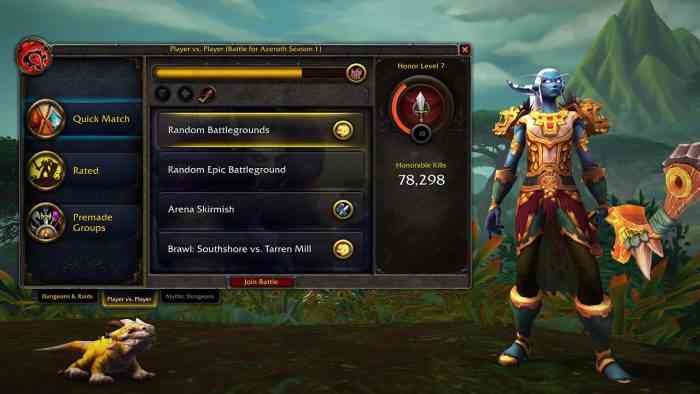 To kick things off, Blizzard will be re-working the elo-based rankings in Arena PvP, where a player would be assigned a number from 1400-2400+ based on their PvP skill. These numbers were divided into multiple brackets to allow players to fight people equal to their skill level.

Currently, a player has to wait until the very end of the PvP season in World of Warcraft before Blizzard review the world leaderboards and give rewards in the form of character titles to those in the higher-end brackets. However, Blizzard say they want to: ‘…increase clarity and offer a more structured progression that recognizes players’ accomplishments in real time as they climb through the ranks.’

In Battle for Azeroth (BFA), as a player climbs through the brackets they will be grants rewards based on their bracket. These brackets are:

Blizzard will also be bringing back Conquest Points to World of Warcraft in order to measure a player’s activity in Rated PvP, which is World of Warcraft’s ‘Ranked’ PvP system. Alongside this, players will also be able to earn pieces of raid-quality gear each week, which eventually amount to full armour sets.

There will also be a change to how a player earns the Vicious mounts in World of Warcraft. Currently a player must win 100 Rated 3v3 Arena matches, or 40 Rated Battlegrounds matches. However, in BFA they will allow games in any Rated game mode (including 2v2 Arena) to count towards the mounts; and this now counts across all of your characters, instead of just the one. 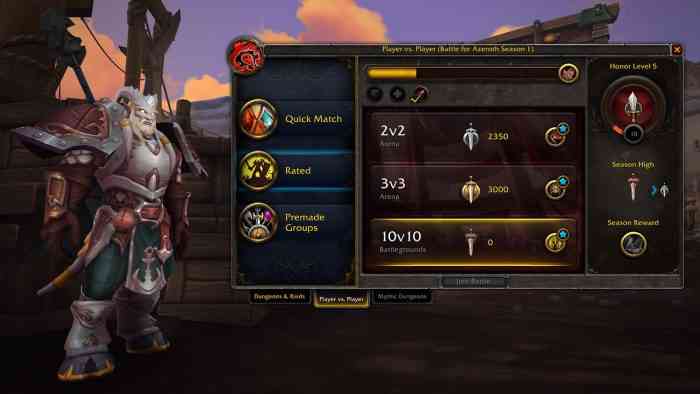 Blizzard will also be adding end-of-the-week rewards for PvP, similar to the chests a player currently earns for completing Mythic dungeons. These rewards will be based off of a player’s progress in their Conquest bar, with their reward for filling it be a piece of gear at an appropriate item level for their character

This gear will also be based off the highest Rated game a player has won in the past week. With Blizzard explaining it as:

‘…if you played and won at Duelist in 3v3, expect to receive a reward with an appropriate item level for your ranking at the end of the week. However, if you were rated as a Duelist in 3v3, but only participated in 2v2, you wouldn’t receive a Duelist level item unless you had won a game in 3v3.’

Blizzard will also be adding regional tracking for players who climb up to the rank of Gladiator, the highest rank in the game’s PvP system, allowing those of you aiming for the very top to be able to see just how far you’ve got to go.

And, finally, Blizzard have also mentioned potentially adding some end-of-season rewards for World of Warcraft PvP players, however this is still in the works and nothing has been set in stone as of yet.

What do you think of these changes? Are you excited for Battle for Azeroth? Let us know!

World of Warcraft Rolled Out Last Major Update for Shadowlands

Is WoW Still the Best MMO?