A new and improved Zombies mode was confirmed for Call of Duty: Black Ops 4 during its reveal event today in Los Angeles. 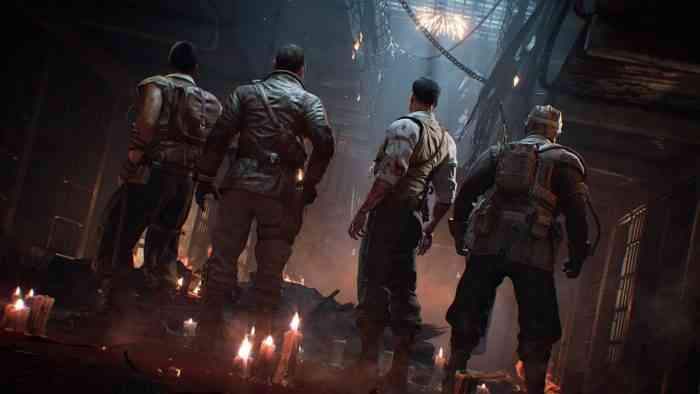 Black Ops 4 lead writer Craig Houston says the new Zombies story will “introduce us to ancient order, hellbent on transforming the world to fit their nefarious agenda.” Players will assume the role of 4 globetrotting, time traveling, adventurers in their efforts to bring down said ancient order. Their names are Bruno, Diego, Shaw, and Scarlet.

In the first of three trailers for the new mode, our heroes take on a hoard of zombies in a gladiatorial arena. It evokes memories of Shadow of Rome, but featuring the rejected souls of the damned. Perhaps most interestingly, this map seems to ditch guns entirely, opting for exclusively gladiatorial weaponry.

The second trailer is a level called Voyage of Despair, set aboard a cruise ship on course for destruction. Characters seem to have different gameplay traits here, with one of them using melee weapons as opposed to pistols, and another using his burly fists to one-punch a guard.

And lastly a short teaser for a map called “Blood of the Dead,” which is a sequel to Black Ops 2 fan favorite map “Mob of the Dead.”

Treyarch promises that all three Zombie “experiences” will launch with the core game on day one. The developer also touched on other additions to the mode, such as “custom mutations,” which are basically gameplay modifiers for various mechanics and details such as zombie speed and player damage. A new Zombie rush mode was also confirmed which is a simplified mode for newbies. Another new feature is “Callings,” a series of post-launch support updates containing seasonal content, timed challenges, “and more.”

What did you think of today’s Zombie reveal? Let us know what you think in the comments! And check out our other coverage of the Black Ops 4 reveal, including changes coming to competitive multiplayer, and the brand new Battle Royale mode called Blackout.