Nicalis Inc. has officially released Cave Story+ for the Nintendo Switch in North America at $29.99 initial retail price. The game is available as a digital copy from the Nintendo eShop or players can acquire a physical Game Card from all major retailers.

Cave Story+ puts the player in the shoes of a young hero who wakes up in a hidden wonderland of terrible danger and glorious reward. Unaware of his origin, his purpose or even his own name, the traveler soon encounters a race of rabbit-like creatures called Mimiga on the brink of extinction. Nearly every character he meets gives him another clue to piece together the story of the Mimiga’s oppression and the mystery of his own past. 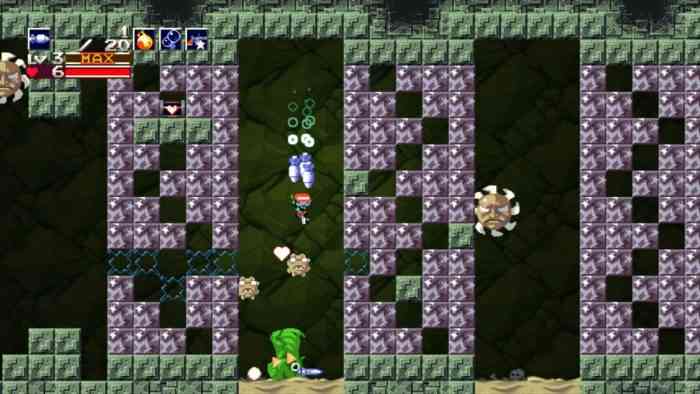 Done in 16-bit, the platform shooter looks a little bit like a bullet hell dodger, but with levels and HP counters, there’s a bit of an RPG element to this game as well.

“It’s a big thrill to have Cave Story+ available on Nintendo’s newest game console,” said the game’s creator, Daisuke “Pixel” Amaya. “I hope everyone enjoys playing the Nintendo Switch version on the big screen and also on the go.”

Physical copies of Cave Story+ for the Switch will feature several fan-pleasing collectible bonus items in the case with the Game Card, including a full-color 32-page instruction manual and a free Cave Story+ Famitracks soundtrack mini-CD. Physical copies sold at GameStop will also include a “blind-bagged” chibi keychain featuring one of three characters, randomly inserted. The instruction manual/CD inserts and the GameStop-exclusive keychains will only be available in strictly limited quantities based on the game’s initial production run.

So what we’re saying is stop what you’re doing, get in your car, go down to GameStop (as much as you dislike their exchange policy), and actually pick up a physical copy for all these cool bonuses!


Throwback Game Spectacular Sparky Will Be Out In October

Save Me Mr. Tako! Has A Release Date

Runner3 Review – Tons of Fun On The Run
Next
Check out This Huge Xbox One Store Indie Sale Going on Right Now
Previous
.hack//G.U. Last Recode Comes to the West in Late 2017