Deadly Premonition Is Getting Its Own Board Game

Coming soon: Deadly Premonition: The Board Game! Despite a pretty generic video game box art, last generation’s Deadly Premonition oozed an off-beat charm that attracted a loyal cult fanbase since its release in 2010. While I’ve only played its spiritual successor, D4: Dark Dreams Don’t Die, it’s pretty easy to understand the adoration for Deadly Premonition as its the best video game ode to the quirky Twin Peaks show. There’s dusty diners, an FBI agent who loves coffee, and an abundance of strange behaviors in a small town. Thus, with Twin Peaks making a return this year, so too, will Deadly Premonition — albeit, in board game form. 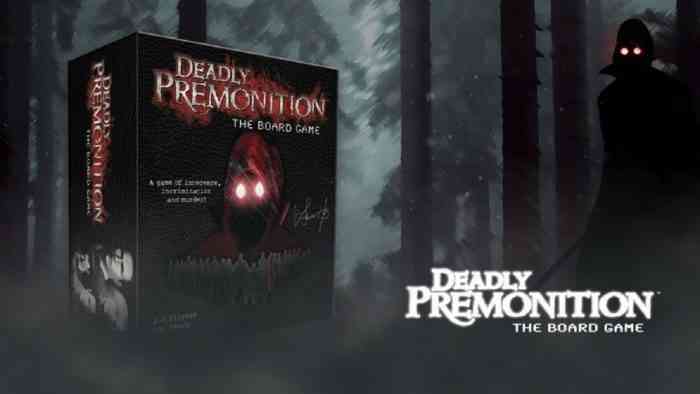 Gamespot reveals a lot more details about Deadly Premonition: The Board Game beyond the teaser video released last week as they report that the game will use a variety of cards and can be played with 2 – 4 players with a breezy gameplay time of 30 – 45 minutes. Players must use their wits and draw cards to find and stop the dreaded Raincoat Killer. Of course, people don’t love the original video game for just that plot, but the game’s bizarre tone. Thus, it’ll be interesting to see how the board game will be able to channel all that groove.

Currently, the board game’s official site has a countdown that finishes up tomorrow, and presumably, we will be able to get more details about the gameplay and its Kickstarter project. Rising Star Games, who published the original game in Europe, will also be helping out with the board game as well. Gamespot goes on to report that Rising Star Games chose to go with crowdfunding as the board game is outside their usual business ventures.

The game’s director, Hidetaka “SWERY65” Suehiro expressed his excitement for the board game project as well in a video below:

If all goes well with its Kickstarter campaign, we can expect to be playing the board game by fall this year.


The Good Life Was Sheepishly Fun at PAX West 2018

You Can Pre-Order That Deadly Premonition Board Game Right Now

Swery65’s Next Game is a Cat RPG called The Good Life
Next
Far Cry 5 Is Rumored to Have A Spaghetti Western Setting in 19th America, Due This September
Previous
Gamers Beat Prey in Less Than 30 Minutes, and We Have No Words