Following a tragic plane crash that killed 71 people on Monday, EA has responded with a gesture of remembrance in FIFA 17. EA has released Chapecoense badges and kits, allowing players worldwide to pay tribute to the players who lost their lives in the crash. 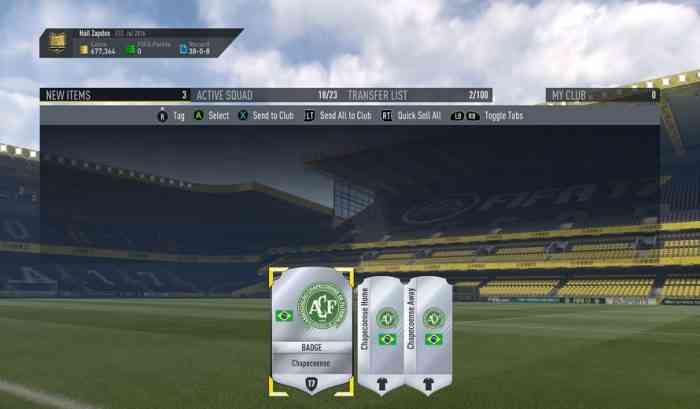 Upon signing into Ultimate Team mode in FIFA 17, players will be given access to the Chapecoense kit and crest. Typically, players would have to earn items like these through random drops or an online auction system, however EA thought it was appropriate to allow all players to show their support for the team. Accompanied with the badge and crest was a message titled ‘In Support of Chapecoense’, which briefly states, “Wear this kit and crest in support of the friends, family, and fans of Chapecoense.”

Over the past few years, Chapecoense has managed to earn a place in the premier division of Brazilian soccer, and 2016 marked the first time the club was set to compete in the finals of the Copa Sudamericana. Unfortunately, the charter plane carrying the team to their biggest game, crashed into a Colombian hillside on Monday. Reports are saying that 71 people are dead, including the Chapecoense soccer players and 20 journalists who were covering the team’s journey. Only six people are believed to have survived the crash.

Any FIFA 17 players who are looking to show solidarity with Chapecoense will be able to find the kit and crest in the new items section of the Ultimate Team game mode.

UFL Could Succeed Where FIFA and eFootball Failed
Next
Star Wars Battlefront 2 Will Be “Much Bigger” Than the Original
Previous
Netflix Is Now Available Offline!