Children of Zodiarcs has surpassed the previous funding record for a Square Enix Collective-supported Kickstarter campaign, hitting $245,000 in its final day. That is in Canadian dollars, mind you, so that means it is more like $150,000 US. Still, a pretty impressive showing.

The game, created by Montreal-based indie team Cardboard Utopia, is a tactical JRPG featuring cards and dice, and inspired by other projects such as Final Fantasy Tactics. The project’s original goal for the campaign was CAD $40,000, but the popularity of the campaign meant that target was reached in the first couple of days. The previous highest-funded project supported by Collective was Tokyo Dark, from Japan-based developer Cherrymochi, which ended its campaign at CAD $225,000 from a CAD $40,000 target.

If you are still interested in contributing,the Children of Zodiarcs Kickstarter campaign ends at around 8:30pm GMT / 3:30pm EST on Friday February 19th, and currently brings the running total of funding achieved by all 8 Kickstarter campaigns supported by Collective to around USD $800,000.

“We’re incredibly happy for the Cardboard Utopia team – their project has really resonated with people keen to play a new game in the tactical JRPG genre,” said Phil Elliott, creator and project lead on Square Enix Collective. “We’ve watched the evolution of Kickstarter videogames funding, and for teams without a well-known franchise or famous designer, crowdfunding is getting much tougher – so we’re really happy that we’ve been able to help teams hit their targets.” 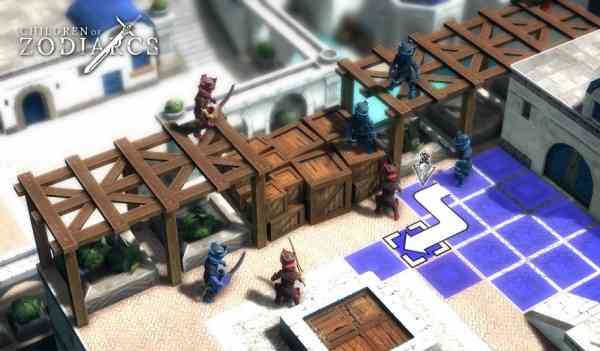 Children of Zodiarcs is estimated for release later in 2016; here is a Kickstarter link.

If you have not yet heard of the Square Enix Collective, it is a platform that aims to help independent developers find an audience for their projects, by enabling them to tap into the SE community and media resources. Projects which gamers support through the initial Feedback phase may be offered continued support through crowdfunding too; but developers are free to choose whether to accept, and retain IP and creative control over their projects.

The Collective also offers distribution and publishing services to games already funded, and invests in production of a small number of titles to help them complete development and get to release.