Under Night In-Birth Exe:Late[st] Review – This Genre Ain’t Big Enough for the Both of Us

What a mouthful. The latest edition of Under Night In-Birth has made it to PS4, and while it continues to add to its title, it adds little else in the [st] version. This visual novel fighting game from 2012 has been ported and re-released numerous times over the years, and while there’s not really new content, the ability to play on current systems around the world is sure to please the fans.

This is an incredibly niche game. If you don’t like anime or fighting games, this is almost certainly not for you and I would recommend avoiding it. It’s geared heavily towards the audience it’s shooting for, and that’s a great thing so long as you’re in their sights. Under Night In-Birth Exe:Late[st] offers not only a robust combat system but hours upon hours of visual novel stories to read as well. I skimmed through a few chapters and while I’m not a big fan of VNs, the work here was done well.

If an intriguing tale and solid combat doesn’t entice you, maybe the art style will. Everything looks hand-drawn like it’s straight out of a manga, featuring bizarre characters and beautiful backgrounds. Attacks and combos have beautiful visual cues and while things might not get as flashy as MKX or MvC, it’s still impressive. I was surprised to see just how well everything actually holds up in 2018; some of the backgrounds could use touch-ups but the character animation was on point. Don’t forget that this is basically a 5+ year port, and not exactly a rework. All things considered, it looks good enough for what it is. One of the biggest issues with Under Night In-Birth coming out with a new edition now is actually the competition it has to deal with. While it’s priced reasonably, you could instead pay a bit more and pick up Dragon Ball Fighter Z, another 2D anime-centric fighter that frankly not only looks amazing but has been reviewing well also. I’m not sure that Late[st] will win over a ton of new fans and really compete in this market when an IP with such a loyal fan base like Dragon Ball has a new game out. Aside from that, the combat system simply doesn’t go as deep as you may want it to. It’s good, and honestly very impressive for a game that also tacks on so much in the story department, but at the very least a larger roster would have been nice to see.

“There’s no way this will ever be a mainstream fighting game, but it’s still a blast to play. “

If you’re a fan of the series and have been craving the latest installment, pick up Under Night In-Birth Exe:Late[st]. You won’t be disappointed but you also know exactly what you’re getting yourself into. Niche markets can be dangerous because it’s hard to really strike a chord with the audience you want, but Under Night has done it well. Through its drawn art style and robust visual novel aspect, there’s seriously a lot to love here, and those who love it will be happy to see it on PS4. There’s no way this will ever be a mainstream fighting game, but it’s still a blast to play. 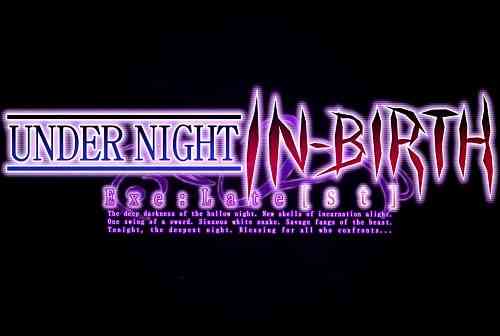