Sprint Vector Review – A Leader Emerges from the Pack

We’re now rapidly approaching the two-year mark since the release of both the Oculus Rift and HTC Vive. In that time players have come to expect more. The honeymoon phase of “any VR is good VR” has passed for all but the most recent converts. So where are things going and who is going to take us there? One of the early standouts was Survios with Raw Data. Now they’re back with Sprint Vector. Will they head into the lead with their crazy racing game or fall back to the pack? Let’s find out.

So what exactly is Sprint Vector? It’s an intergalactic game show where the best racers in the universe compete against each other. Take one part sprint, add in some Mario Kart, and a healthy dose of Wipeout (the TV show, not the game) and there you are. More simply put, it’s a race through an obstacle course at high speeds and with plenty of power-ups to enhance the flavor. Take all of that and roll it up into a bright flashy and gorgeous setting, bam!!!

“It’s an incredibly fun game that sneakily gives users one heck of a workout.”

Now the thought of all that sounds like the making of a great game in any medium, but in VR you’re probably thinking it sounds like a recipe for some serious motion sickness. Frankly, I was worried about this, but due to some sort of black magic they call the Fluid Locomotion System I wasn’t even remotely sick. Well, I didn’t get motion sick at least. While on the ground everything is rock solid. In the air is a slightly different matter, no motion sickness there either, but the first jump or two of each session usually had me leaning pretty hard.

The controls are some of the most active out there. Running requires swinging your arms similar to the way you would in real life, although in my mind it feels more like using ski poles or a Nordic Track even. As the player raises one arm up they hold the trigger button and don’t release it till that hand comes down to around the hip area. It sounds more complicated than it is and is pretty easy to get the hang of. Jumping is done in a similar manner, but instead of pulling the trigger, it utilizes pressing the trackpad. 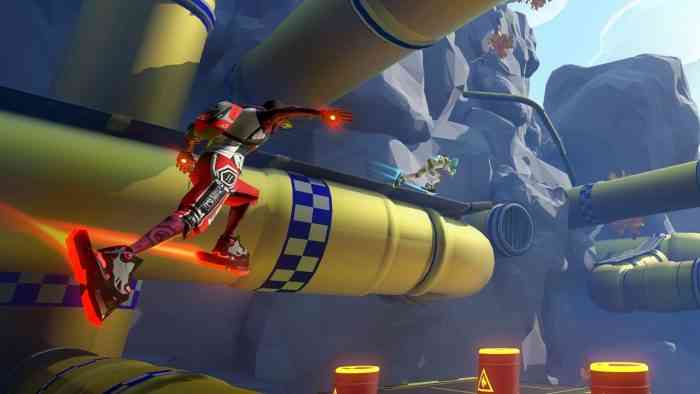 Braking is pretty simple, activated by just the grip buttons on the side of the handles. That leads to a few inadvertent braking maneuvers as you are already gripping the controllers tightly for the running motion. Finally, turning is performed by actually turning and facing the direction you want to go. It’s another one that sounds simple enough, but I found myself naturally wanting to lean into the turns. That’s a hard habit to break. All of the controls make sense but they certainly will require practice to get right.

“It’s hard not to be immersed in a game that requires so much physical interaction.”

Good thing there are plenty of chances to practice. Sprint Vector has 12 courses to race through either casually, competitively, or against other players like you. The designs are all rather unique and varied each with their own bits of flair. But if you are looking for more of a test of your skills there are 9 challenge mode tracks. These feel more like running a course on Wipeout, which is pretty awesome on its own. There is more than enough content to hold one over especially when you consider the “workout factor”.

Sprint Vector is a no joke workout the likes of which I’ve yet to encounter in VR. I’ve played workout games, and even other games that require lots of movement, but none so far have matched Sprint Vector’s ability to make you sweat. It’s a whole different level of workout and that takes things from zero to sweat pouring into your headset in a matter of seconds. If ever there was an opportunity for branded VR accessories it’s here. Some Sprint Vector waterproof VR covers would be just what the doctor ordered because there’s no way that I won’t be changing out the sweat and stink infused foam on my Vive now. Even the next day I can still smell the stink on my face as if I got a face wash by the smelliest hockey glove ever.

Lastly, let’s talk immersion factor. It’s hard not to be immersed in a game that requires so much physical interaction. Being set in such a beautiful and well-crafted world doesn’t hurt either. These highly stylized worlds have a way of pulling you in more than a photo-realistic one would. It’s interesting to consider on its own, but in a photo-realistic world it’s hard not to compare what is seen to real life and that can magnify imperfections. Besides, we live in the real world already, when else do we have a chance to star in an intergalactic game show?

There is very little to find at fault within Sprint Vector. It is a highly polished offering from the get-go. The game manages to deliver a high-speed VR experience with little to no discomfort. That alone is no small feat. It’s an incredibly fun game that sneakily gives users one heck of a workout. Survios had already positioned themselves in the lead pack with Raw Data. With Sprint Vector they have offered a compelling and new experience to VR users and may have just taken the lead as one of the top VR developers with this one. 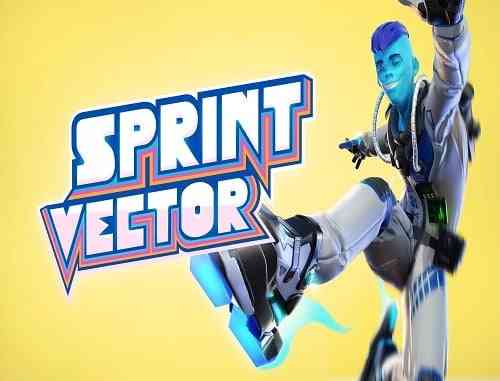