I was initially fooled by this game. At first glance, it looks like it should be a free to play mobile title. Yet a little time spent with Rainbow Skies dismantled both these crass assumptions in short order. While I was put off by the slightly bobble-headed character models and the cheery color palette, there’s a certain satisfying depth to this game. For RPG enthusiasts invested in the zen-like rhythms of the grind, Rainbow Skies is something of a hidden gem.

You play a meat-headed swordsman who is ejected from the floating city you call home after a disastrous accident involving slimes and explosions. Upon waking up in the world below, you quickly realize that citizens down here utterly despise you and your people. What follows is a quest for answers. While this synopsis sounds dire and sinister, the narrative is played for lighthearted laughs almost the entire time. Not only that, but the humor actually lands on occasion. Like the gameplay, the story found ways to surprise me.

I have a terrible weakness for RPGs that let you level up tons of separate components at your whim and leisure. Rainbow Skies features stat upgrades, equipment levels, skill levels and character levels. It’s just wonderful, assuming you’re the sort of person who loses countless hours on such things. Combat is a measured affair, one that encourages careful planning and patience. The challenge level isn’t too overwhelming, unless you want it to be. 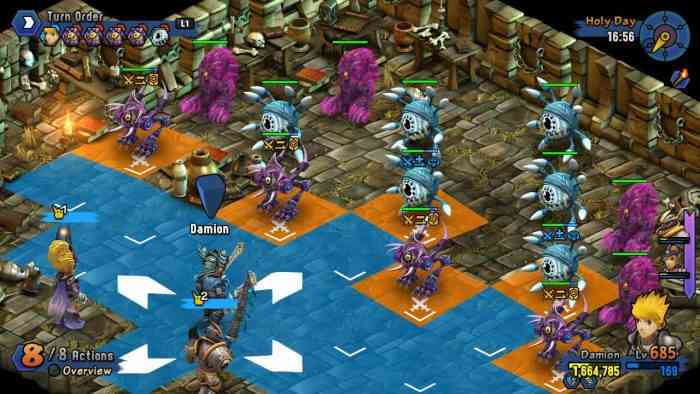 Eventually you get into raising monsters on the side. They’re more or less extra party members that you can collect and raise up much like your primary team. You can even load them up with skills and equipment. Like the other systems in Rainbow Skies, there’s a surprising amount of depth present. The only downside is that you need to invest a prohibitive amount of time for these things to bear fruit. With your monster party members, they can be invaluable allies that fill the gaps in your strategy. You just have to cultivate them first. For a game with so much leveling to be done, the pace of combat can really crawl. You can skip your own attack animations, but not the enemy’s, which is frustrating. At least you can’t do so reliably. There’s no setting to turn that stuff off either. Normally this wouldn’t be an issue either way, but the multitude of systems to explore feature a lot of skills and levels to max out. If you’re the kind of gamer aiming for those maxed out levels, having to sit through all the attack animations several thousand times is a pretty big deal.

If you’re a PS Vita owner, great news! You can transfer your save file from the Vita to the PS4 with very little effort. As an added bonus the graphics (which I’m still not totally sold on) come off much better on Sony’s plucky handheld. As a matter of fact, once I transferred my file to the Vita, I just didn’t go back. I know that the Vita as a console is past tense at this point, but my time with the Nintendo Switch has opened my eyes to the inherent value in modern portable gaming options. It’s a complete pipe dream, but I’d love it if more companies offered this kind of cross buy functionality.

One of the many systems you can dive into are the sidequests. Although there’s no quest markers hovering over anyone’s heads, almost everyone you talk to will offer up some kind of optional activity to engage in. It’s a delightful extra layer to an already deep game. I only wish navigating the quests menu wasn’t so torturous. It almost seems designed to hide information from you. If the goal of the devs was to keep you from mindlessly running through every sidequest all in a row, then they succeeded. To do so using this system would be almost impossible. Otherwise I’m baffled at the design decisions being made here.

Ultimately, Rainbow Skies is a fascinating exercise in time. You’re given a huge variety of tasks to complete at a pace you set, be it the main quest or one of the many diversions available. There’s a lot of freedom in this system that’s undermined by your slow progress in completing any of these tasks. Combat, progression, raising monsters and navigating the world are all slow activities. I don’t mind the pace, yet I can’t ignore it. I want to carve out a huge chunk of time to master all the little challenges set for me by this game, but my lifestyle doesn’t allow for this. To that end, I think Rainbow Skies is an excellent title for any RPG enthusiast who isn’t locked to an aggressive review schedule or an ever-expanding backlog. If you’re the sort of person who delights in maxing out skills and levels of all sorts, you’ll want to check out Rainbow Skies. 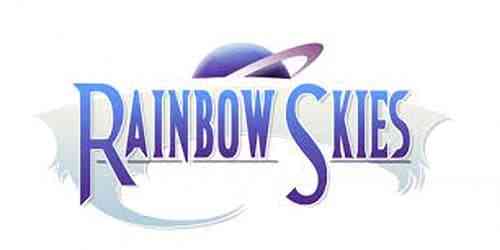